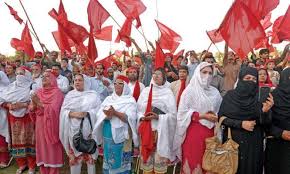 PESHAWAR, 24 May: Awami National Party (ANP) chief Asfandyar Wali Khan has claimed that Lahore was not included in the original map of Pakistan-China Economic Corridor (PCEC).

“It would be a great injustice with the Khyber Pakhtunkhwa and Balochistan if certain parts of Punjab province are included in the Economic Corridor route,” the nationalist leader said, addressing a public meeting in connection with upcoming local government elections at Parda Bagh here today.

Flanked by former chief minister of Khyber Pakhtunkhwa Ameer Haider Hoti and a number of party leaders, he directed the party workers to expedite electioneering.

He said that the PCEC project was basically aimed at ushering an era of prosperity to militancy-stricken provinces of Khyber Pakhtukhwa and Balochistan. But, the federal government is maneuvering to shift the dividends of the project to Punjab, he said, adding that it would further increase the sense of deprivation among the two provinces.

He went to add that the Centre should also come clear about the places where economic zones would be established so that suspicions about them come to an end. He said that he would continue fighting for the rights of Pakhtuns and nothing can stop him from doing so, even if he is imprisoned.