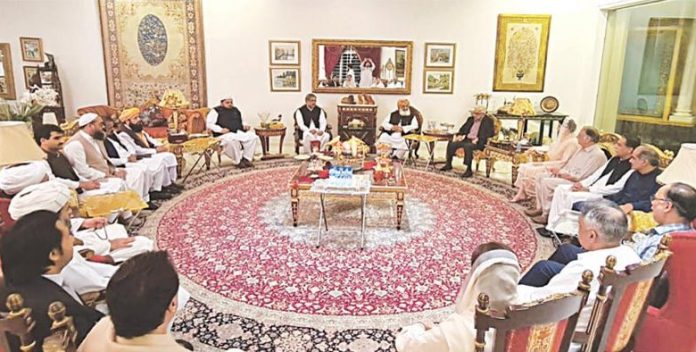 Pakistan Democratic Movement (PDM) has announced an anti-inflation march on the federal capital on Pakistan Day to protest the government policies.

PDM chief Maulana Fazlur Rehman told reporters following a moot of alliance constituent parties that current government has come into power due to electoral rigging. He said that the opposition alliance will march on Islamabad on March 23 next year to protest the price hikes. Mr Rehman said that PDM provincial chapters will hold meetings on this subject.

“A seminar will be held to consult lawyers as well,” he said. Maulana said that PDM steering committee will meet on Tuesday.

Regarding the Sialkot lynching of a Sri Lankan citizen, PDM chief said that the moot strongly condemned the incident. “No one should be allowed to take law into his hand,” he said. Maulana said that steps needs to be taken stop similar incidents in future.

Regarding resignation from assemblies, PDM chief said that they will use this card on time of their choosing.

To a question about reports of his quitting as PDM chief, Maulana said that media spread fake news. “I protest to media for spreading this fake news,” PDM chief said.