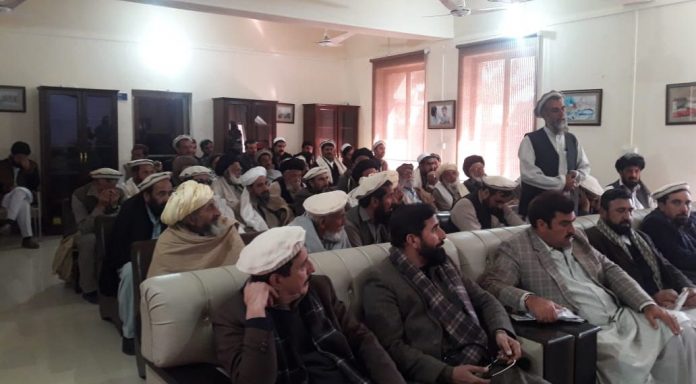 Doctors of the hospital, paramedical staff, elders of Utmanzai tribe and attendants of patents attended the open court in large number. People at the open court amassed a lot of complaints about the hospital administration and state of affairs.

Malik Ashrafi Darpakhel said on the occasion that there was shortage of lady doctors in the hospital, while ultrasound, x-ray machines and intensive care unit were also not available.

Malik Imshadullah said the people of North Waziristan are poor and cannot afford to go to other districts for medical treatment. He said the doctors of Miranshah Hospital should make sure their presence in the hospital in time. He said sometimes doctors don’t arrive in time on their duties due to which patients face difficulties.

Malik Shariat Khan said Khyber Pakhtunkhwa Health Minister Hasham Inamullah Khan visited the hospital and made several announcements, but none of them has been implemented so far. He said the announcements of the health minister must be implemented immediately. He said there was shortage of staff in the hospital and equipment and medicines are also short in supply. He said patients are facing difficulties due to this situation.

MS Dr Sultan Muhammad said the open court was arranged on the demand of the local people. He assured that practical steps will be taken for resolution of all the problems pinpointed during the open kutcheri. He said it is the responsibility of everyone to take care of the hospital. He said complaint boxes have been placed in several places at the hospital. He said people can drop their complaints in the complaint box and their issues will be addressed. He said immediate action will be taken to address the genuine grievances of the people at the hospital.

Dr Sultan Muhammad thanked the people who attended the open court. He said open courts will be held at the hospital after every two months. The local elders also expressed satisfaction over the khuli kutcheri and hoped that their grievances will be addressed.