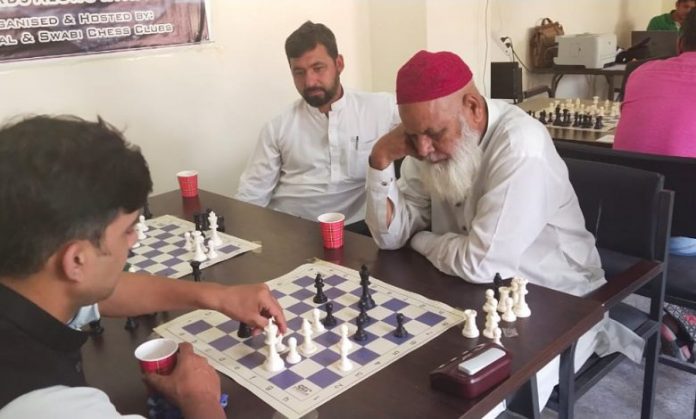 CHITRAL: For the first time, an open chess tournament has been arranged in Chitral in which 52 players are participating.

The tournament has been arranged jointly by Chitral Chess Club and Swabi Chess Club. Member National Assembly from Jamaat-e-Islami (JI) Maulana Abdul Akbar Chitrali was the chief guest at the inauguration ceremony of the sporting event on Saturday, while the deputy commissioner presided over the function.

Chess, known as the sport of kings, is a popular sport in all parts of the world. Arrangement of such a mega event of the sport is being termed a positive development and the participating players believe that their talent will further be polished with this event and they will get recognition at the national and international level. They believe that Pakistan has a great talent in this sport and local players can shine in the international level contests if they get proper opportunities.

The current tournament is being played under the *Swiss system comprising nine rounds. Organisers said 52 players from different parts of the country are taking part in the tournament who have already played national and international level tournaments. Four rounds were completed on first day of the tournament, while five more rounds will be played till the concluding ceremony.

District Sports Officer Akhunzada Abdur Rehmat said the Sports Department will promote healthy sports activities to attract the youth towards positive activities and keep them away from narcotics and other negative activities.

Azeemuddin, a senior local player, said he is playing chess for the last 55 years. He said he also plays chess with his wife and daughters which is considered strange by the people. He said there is a lot of talent in Chitral which needs government patronage. He said he has currently hired a room for practice in Chitral.

1) Swiss-system tournament is a non-eliminating tournament format that features a fixed number of rounds of competition, but considerably fewer than for a round-robin tournament; thus each competitor does not play all the other competitors. Competitors meet one-on-one in each round and are paired using a set of rules designed to ensure that each competitor plays opponents with a similar running score, but does not play the same opponent more than once. The winner is the competitor with the highest aggregate points earned in all rounds. All competitors play in each round unless there is an odd number of them.

‘I quit job when boss started harassing me’