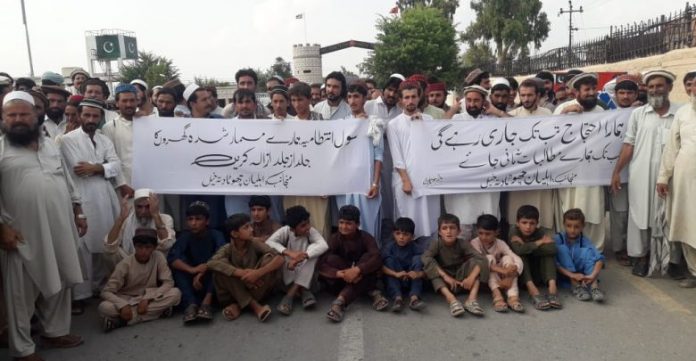 MIRANSHAH: The people of Chahota Dattakhel area in North Waziristan tribal district on Thursday held a protest demonstration over not receiving compensation for houses damaged during military operation.

A tribal elder Malik Abdul Khalil said while addressing the protesters that the people of Chahota Dattakhel have already announced boycott of polio vaccination campaign since April 15 in protest against not getting compensation. He said the civil administration is ignoring the future of hundreds of children and not accepting genuine demands of the tribesmen.

Abid Khan from the tribe said hundreds of houses were completely damaged and dozens others were partially damaged during military operation in Chahota Dattakhel. He said a survey was conducted in the area two years ago, but 327 owners of the damaged houses have not been paid compensation yet.

Abid said several people lived in tents during summer and winter and some children also died due to extreme cold weather during winter in tents. He said the people of the area are running out of patience and now they will file FIRs against responsible officials if any child from the area was affected by polio virus. He said the tribesmen will also block Bannu-Miranshah Road completely if their demands were not accepted and protest will be further expanded.

The people of the area are observing boycott of polio vaccination since April over their unfulfilled demands, but the problem remains unresolved. Some of the polio cases reported this year in Khyber Pakhtunkhwa and tribal districts were due to non-cooperation by the parents with polio vaccination teams.

Two weeks ago, the people of Haiderkhel village of Mir Ali tehsil in North Waziristan also threatened to boycott polio vaccination campaign if they were not paid compensation for their damaged houses.

People of the area made it clear that they will not vaccinate their children until they get compensation for their damaged properties. They said many houses were damaged in Haiderkhel village during military operation Zarb-e-Azb in North Waziristan. They said people of other villages got compensation, but the people of Hiaderkhel village were left out for unknown reasons.