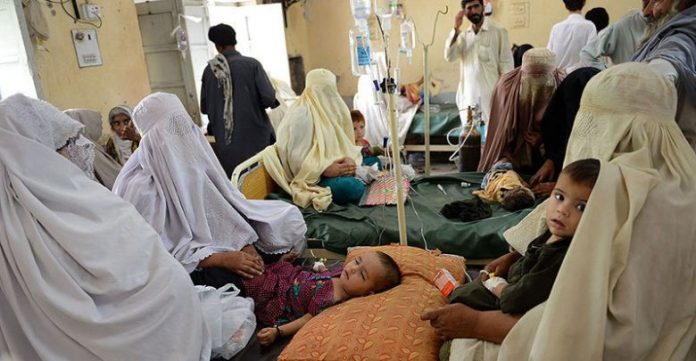 The District Headquarter Hospital in Bannu, though the largest hospital in the district, but the doctors aren’t available or not ready perform their duties. This is all despite the fact that the government of Khyber Pakhtunkhwa has declared the emergency in health sector to change their entire structure of hospitals.

A youngster by the name of Ihtisham was brought to the DHQ hospital, however; despite passing several hours on the bed, he couldn’t find a doctor to treat him. His father Niamat Ullah Khan said that they have brought their son to the hospital at 2 pm, but after a long search, he finally found a doctor at 9 pm.

“He remained on the bed in hospital but there were no doctors available till 9 pm,” alleged his father Niamat Ullah. “At the end, I’ve found success to find a doctor, however, he also failed to treat my son properly.”
He strongly criticized the government for “false claims of change” in the hospitals of the Khyber Pakhtunkhwa.

When the Medical Superintendent of District Headquarter Hospital, Bannu, Dr Qazi Fayaz Uddin was contacted by the TNN, he claimed that his doctors have never committed any negligence in performing their duties. “My doctors have not committed any negligence,” claimed Dr Fayaz. However, he said that he is not responsible for providing all the medicines to the patients and made it clear that the medicines which are not available in the hospital should be purchased from the market by the patients.

When he was asked about the story of the patient, Ihtisham, Dr Fayaz said that he has appointed an enquiry for the incident, and if anyone is found guilty of negligence, he will be taken to justice as per the law.

The young patient, however, not found proper medical treatment in the hospital despite all efforts made by the family and finally, as a protest, he was shifted to the combined military hospital in Bannu.