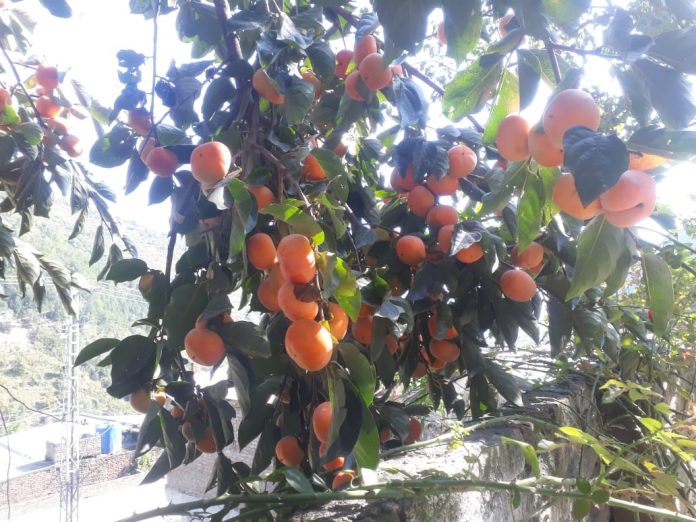 SHANGLA: The production of persimmon has increased manifold in Shangla during the last few years and due to abundance now it is supplied directly to market when it gets ripe on the tree.

Experts say this fruit was found in China hundreds years ago and then it shifted to Japan, Korea and Pakistan. The land of Lower Dir is considered very fertile and suitable for persimmon, but its orchards are also found in Shangla. Fruit has been plucked from most of orchards with the advent of autumn, but few fruits could still be seen on the tree branches covered by yellowish leafs.

The growing number of persimmon orchards on the road leading from Alpuri to Ranial present an attractive scene which not only add to the beauty of the area, but also brings job opportunities for locals.

Until few years ago, people used to grow persimmon trees at homes and dry the fruit by cutting it and placing it in a cloth and serve it with dry fruit. However, with increase in demand, now people have started growing persimmon orchards and supplying it in market.

Muhammad Arif, owner of a plants nursery, said more people are taking interest in growing persimmon with its increasing demand. He said persimmon plant can even grow in unpaved soil, it did not require much watering, cutting or spray etc and grow like a wild tree.

“We still call it a wild tree which grows without much effort,” Arif told TNN.

Ziaul Haq, an orchard owner in Shahpur, said he sold his orchard fruit for Rs350,000 this year. He said the yield was better than last year despite some damage by hailstorm. He said many local farmers have switched from growing maize to persimmon orchards as it is more beneficial.

Ziaul Haq said there are two methods of growing persimmon orchards – it can be grown directly by bringing saplings from nursery, and the second method is to sow the seed of wild persimmon and then graft it when it grows for two years. He said the plants of grafting are even better than the farm plants.

There was no culture of market supply until the last few years and people in Shangla used to grow persimmon for own consumption or serving to guests. But now increasing demand means that people are growing it commercially. In Shangla, the rate of a carton in market this year was about Rs100 to Rs200. A carton has about 50 to 60 persimmons having about 6-8kg weight.

Bacha Hussain, a local persimmon dealer, said the yield of this year is 50 percent more than the previous year. He told TNN that the dealers collect the fruit through workers from orchards and bring it on roadside and then small dealers transport it to Rawalpindi, Peshawar, Lahore and other big cities through trucks where the agents receive their commission and pay the rest of money to dealers.

Problems of farmers and dealers

Bacha Hussain said dealers had to purchase orchard fruit in advance, but it they are unlucky, then bates attack the orchards and damage it which causes financial losses.

He said no spray or medicine is available in market to ward off this threat. He said the agriculture experts must play their role for finding a solution to this problem.

Climate change is generally perceived as having negative impact, but it has proved good for Shangla in shape of increased production of persimmon.

Tariq Rauf, a PhD fellow on climate change, claims that climate change had good impact on Shangla where forested area increased from 32 percent to 38 percent during the last few years, which is second largest in Pakistan. He said increase in forests brought a positive change in Shangla climate with increased rains, snowfall and increase in fruit production.