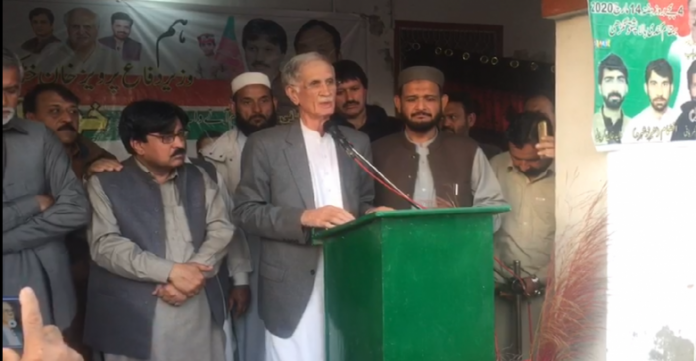 NOWSHERA: In an open violation of the government’s ban on public gatherings amid the coronavirus threat, Federal Defence Minister and important leader of the Pakistan Tehreek-e-Insaf (PTI) Pervaiz Khattak on Saturday held a public meeting in Nowshera, which is drawing criticism from all quarters.

Interestingly, Pervaiz Khattak while addressing the public meeting also shared the steps taken by the government for prevention of coronavirus and also praised these steps.

Responding to the global emergency-like situation, the Khyber Pakhtunkhwa government has closed all the educational institutions in the province for two weeks also also banned public gatherings and even closed wedding halls. Prime Minister Imran Khan also chaired a meeting of the National Security Committee in which public gatherings were banned.

However, Pervaiz Khattak, one of the main PTI stalwarts, held a public gathering in Pashtoon Garhi area of Nowshera on Saturday in which hundreds of party activists participated. The federal minister praised the government policies, including the measures to prevent the spread of coronavirus.

Pervaiz Khattak said Prime Minister Imran Khan has banned public meetings as part of health emergency till Eidul Fitr. He said along with the government, it is also the responsibility of the opposition parties and government allies to take part in the fight against coronavirus.

Mr Khattak said the situation of coronavirus in Pakistan is mostly under control. He also praised the efforts of Punjab, KP and Balochistan governments to control the disease. He urged the people to adopt precautionary measures to avoid the disease.

However, the federal minister was in fact himself playing with fire as he was holding a public meeting despite clear orders of the federal and provincial governments to the contrary.

Mr Khattak also used the rally to criticize the political opponents, saying that the previous governments have ruined the national economy and Prime Minister Imran Khan was taking difficult decisions to correct the state of affairs.