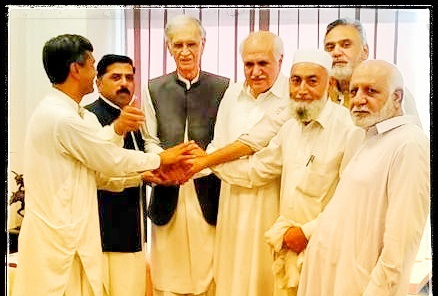 The reconciliation became possible with the efforts of local elders and members of Pakistan Tehreek-e-Insaf (PTI). Differences between the two brothers surfaced after the death of former member of Khyber Pakhtunkhwa Assembly Mian Jamsheduddin Kakakhel due to coronavirus. At that time, Pervaiz Khattak announced to give the ticket of PK-63, which was left vacant after the death of Mian Jamsheduddin Kakakhel, to his son Umar Kakakhel. However, Pervaiz Khattak’s younger brother Liaquat Khattak, who is also a provincial minister, opposed this announcement.

The tension intensified few days ago when two groups of the PTI clashed over holding of a public rally by Pervaiz Khattak in Nawan Killi area of Nowshera Kalan. The two groups exchanged fire, in which one person lost his life and two others were injured. A massive protest was also held after the firing incident. The protesters demanded Prime Minister Chief Minister Mehmood Khan to take notice of the matter and make sure that the culprits involved in the incident are punished.

Local elders said some people were taking undue advantage from differences between the two brothers that is why the local PTI leaders enhanced efforts for reaching patch-up.