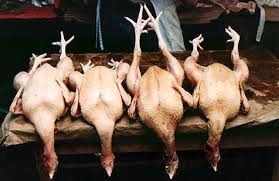 The Peshawar Assistant Commissioner, Mr Mumtaz Ahmad, said that on a tip-off they conducted a raid in Chamkani area of the provincial capital and recovered 25 tons meat of dead chickens.

He added that the dead chickens had been brought to Peshawar from Punjab province for onward supply to hostels and shops in Peshawar in the packing of a renowned company.

The assistant commissioner said the authorities had also arrested the driver and security guard of the container.