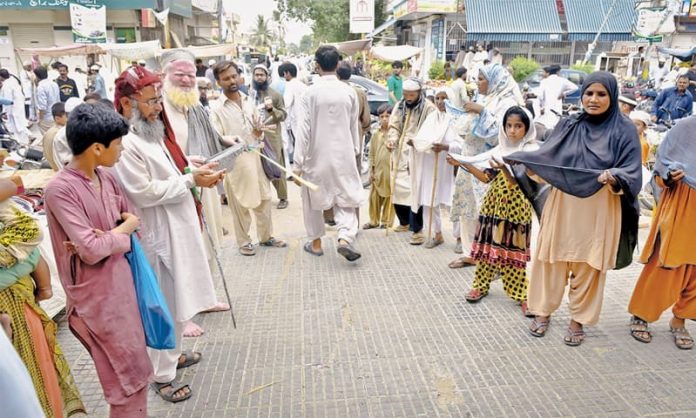 Believe it or not, but Peshawar beggars are managing to earn as much as the salary of government officers in BS 20 and 21 a month.

An Intelligence Bureau (IB) report submitted to the Peshawar district administration stated that there were 1356 beggars operating in different parts of the city.

Intelligence Bureau report contains some interesting details about the daily earnings of these vagrants. The figures are astounding. Vagrants operating in affluent neighborhoods like Hayatabad and University Town, beggars managed to earn up to Rs 10,000 a day. In busy markets like Saddar, beggars manage to earn Rs 6,000 a day. Their monthly income goes up to Rs 300,000 a month.

Following the report, Peshawar administration has launched a campaign against the beggars in the city. About 150 beggars including 50 women have been detained.

On the other hand, experts say the government has not taken practical steps to address this issue. They say such campaigns have been carried out in the past. However, beggars reappear on roads a few days after such campaigns.

Mr Mehsud said that most of the beggars have come from other districts while some belonged to districts.

Begging underworld of the city

Intelligence reports showed that there were 21 contractors in the provincial capital who were running a beggars gang. The contractors assign spots to beggars and provide them pick and drop services.

A Special Branch report stated that six contractors belonged to Kunduz province of Afghanistan, five from Malakand, two from Bannu and one each from Lakki and Kohat.

Two of the contractors are said to be from Sindh and one from Peshawar. The report said that 813 beggars were local while 363 from other districts. In addition to this, 35 vagrants belonged to Afghanistan while 35 to other provinces.

The Special Branch data said that 1191 beggars were needy and 164 other professionals. About 262 of them work with contractors while 1088 were independent.

Like the rest of the world, there are two categories of baggers in Peshawar. One of them is individuals who are on their own. They usually beg due to poverty and gradually become habitual.

Beggars gangs fall in the second category, which are run by contractors. There are said to be contractors in Peshawar which translates into the same number of gangs.

A Special Branch official told TNN that these gangs have hired women and children. Besides, they have also divided the city among themselves.

Beggars from gangs cannot go to other gang areas. Besides these gangs do not allow individual beggars into their areas, the official said.

He said that beggars gather in the evening where they handover his share to the contractor keeping the rest for themselves. The official said that contractors usually have long arms and do not allow gang members to leave the gang.

He said that some of these gangs are operated by women. However, most of them are gypsies who live in makeshift camps. Some of them, according to official, also engage into prostitution.

The police officer said that on Thursdays, a large number of beggars could be seen at markets. The reason for this, according to officials, is that traders usually receive their dues on that day and beggars also end up collecting their share.

On the other hand, young gypsy girls could be seen begging at bus stands.

District social welfare officer Younas Khan told TNN that gangs of gypsy females are the most organized gangs. They pester people for money and even pull their clothes. Sometimes, he said that these gypsies also engage in immoral activities to earn money.

He said that most of the gypsies belonged to Sindh and authorities were evicting them from the province. He said that their makeshift camps near the Motorway were being demolished.

Though official reports are silent about the number of minor beggars; however, a large number of children could be seen begging all around the city.

Besides begging, some minors could be seen selling toothpicks, rosaries, masks or low priced items. However, end up collecting much more from what people give them in charity instead of selling those items.

Fida Adeel, a Peshawar based journalist said most of these youngsters were easy victims of sexual abuse and other forms of violence.

District social welfare officer Younas Khan also agreed with this. He said that sometimes back, following a viral video, they shifted several street children to Zamung Kor. Mr Younas said that their investigations established many of those children worked at local eateries. He said besides other work, these minors were made work as masseurs and subjected to sexual abuse.

He said that some of the vagrant children were given specific targets by parents to collect on a daily basis. To meet their targets, these children sometimes end becoming prey of sexual predators and committing petty thefts.

Mr Khan said that usually these children are left on the street helpless but when authorities enroll them into schools, the families emerge to take them home.

The case of needy beggars

In the ongoing campaign, district administration is targeting both the professional as well needy beggars.

Rubina (not her real name), a beggar in Peshawar Cantt claimed she had been forced to beg. She said that her husband is a drug addict and she has ended up begging to raise her six children.

“I tried working at home; however, could not land a job and as a last resort started begging,” she said.

Rubina said that she contemplated committing suicide; however, thought of her children stopped her.

She said that if the government provides her with a stipend or some jobs, she would quit begging. “How can the government stop us from begging without providing an alternate source of income,” Rubina questioned.

What awaits the arrested beggars?

Khyber Pakhtunkhwa Vagrancy Restraint Act 2020 has criminalized begging. Under this law, if someone is found begging, he could be fined up to Rs 500,000 and a yearlong behind bars. Besides, the law provides for sending detained beggars to special centers called Darul Kafala.

Darul Kafalas besides lodging and food will also teach these beggars different skills and trades.

On the other hand, authorities have yet to send any beggar detained during the ongoing campaign to the Darul Kafala. Besides these centers in the districts also lack facilities for the beggars.

Sources told TNN that Darul Kafals of Peshawar only have space for 50 to 60 beggars. These centers also lack training facilities for inmates.

Qamar Naseem, a social activist from the Peshawar government has not allocated a budget for these centers. “These centers even lack resources to house and feed the beggars thrice a day,” Mr Naseem said.

Mr Younas said that only minor beggars were being sent to Darul Kafalas in the ongoing campaign. He said that after producing them before court, minor vagrants would be sent to Zamug Kor, which has lodging, feeding and education facilities for such children.

Is end of begging in Peshawar in sight after this campaign?

Mr Younas said that most of the arrested beggars would be out soon after being released by courts. He said that Commissioner Peshawar has planned to take up this issue with the session judge to deny quick bails to the beggars.

The administration is trying to make the process of bails difficult for the beggars, he said.

“Sometimes behind bars would teach them a lesson,” the official said.

The law provided for sending first time baggers to Darul Kafala and habitual to jail. However, Mr Younas said that habitual beggars have no interest in learning a skill.

Journalist Fida Adeel views the campaign with suspicion. He said that similar campaigns have been launched time and again but they were publicity gimmick.

Mr Adeel said that sometimes back, the social welfare department has launched a similar campaign against drug addicts. However, he said that the drug addicts have again reached the same spots. “This shows that the crackdown is just a publicity stunt,” he said.

He said that some days back, he saw a group of vagrant children sleeping under the BRT flyover in Peshawar Cantonment.

Mr Adeel said that the arrested beggars would be out soon.”Authorities will arrest the beggars while courts in turn bail them out,” he said, adding that some days later the campaign will be forgotten with the beggars on the street again.

However, the district social welfare officer, on the other hand, sounded optimistic. He said that the crackdown will make it difficult for the beggars to reassemble. Mr Younas said that out of district and out of province vagrants would be ousted from the city and they would not be allowed to sneak back into it again easily.