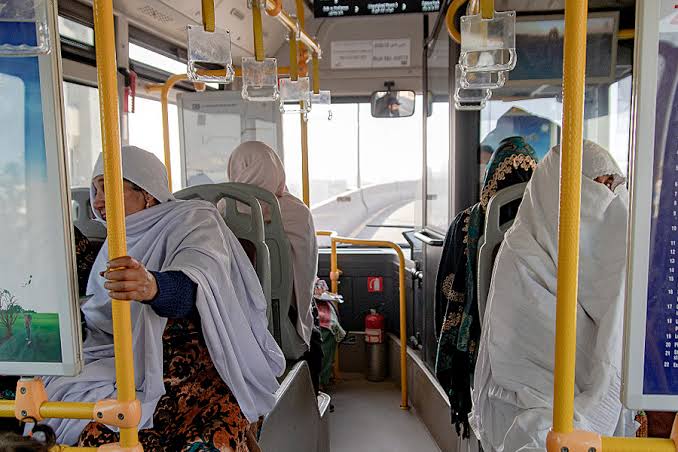 Roshan Bibi, a resident of Kohat Road, every day at 9am boards a Peshawar Bus Rapid Transit (BRT) bus to arrive at a Hayatabad house where she works.

Thanks to BRT service, Bibi’s daily commute to the other end of the city has turned into a hassle free affair as the bus service is cheaper, comfortable and secure.

“For the first time, Peshawar has got buses like other countries and it is really a good thing” Bibi told the TNN.

Even more heartening for females like Bibi is the fact that there are 10 reserved seats for females on each bus. Males are not allowed to occupy those seats even when females are not around.

It is in sharp contrast to practice of private transporters who allowed males to occupy female seats while at times when males were requested to vacate women seats, they used to throw huge tantrums.

Maryam, a student from Medina Colony told TNN that a large number of female students were benefitting from the BRT service. She said that females used to face huge issues in using private transport. “We had to wait for about 20 minutes for bus, which upon arrival used to be usually full and hardly any place available to sit,” she said.

She said that in private buses, usually males stood close to female compartment while boys used to teased females. On the other hand, conductors hated to return the change after deducting their fare and never bothered about stopping at proper stops.

Maryam said all this has changed now after the launch of Peshawar BRT. A bus arrives on station every five minutes which has a reserved entrance for females while fare is paid through a pre-paid card.

A spokesperson for the TransPeshawar, the operator of the Peshawar BRT service said that it has 2000 employees. He said more than 190,000 commuters were using the bus service on daily basis. He said that women mobility has increased up to 20 per cent due to safety and security offered by the bus service.

The spokesperson said that buses were secure and safe both the women and children, who were using the service to commute to their schools.

He said that now Peshawar citizens were commuting in air-conditioned buses, which had free wifi and mobile recharging facilities as well.  He said that spaces have also been reserved in BRT stations and buses for disabled people and transgender.

He said that BRT stations and buses had modern information systems installed for updating commuters about the service while stations have automatic doors to ensure safety. In addition to this, lifts and escalators have also been installed at BRT stations. The spokesperson said that the BRT service has reduced the hours long 27 kilometers commute from Chamakani to Karakhano Market to 45 minutes.

He said that services offered fare payment through mobile, card and token system while the service also had a cycle service as well.

Khyber Pakhtunkhwa former chief minister Pervez Khattak had performed groundbreaking for the project in October 2017. The project was initially scheduled to be completed within six months; however, due to frequent design changes and other issues, project completion deadline changed on at least on eight occasions. The project initial cost of Rs 49 billion also swelled to Rs 71 billion.

The project was formally inaugurated back on August 13.2020 and is in service after a brief hiatus which occurred due to incidents of fire breaking out in the buses.

Samina, a female employee of the TransPeshawar told TNN her job was with company was very secure. Samina is paid Rs 21000 salary per month. “Even our uniform is just like a veil,” she said.

Hina, a nurse from Asiya Gate area of the city told TNN that she uses BRT to commute between her home and work as it was not only secure but also always on time. She said that in the past, private buses were also overcrowded while always hiring a rickshaw was expensive but BRT is saving her both the time and money.

Roshan Bibi is of the view that the women like her have nothing to do with the criticism against the project or it being failure or success. “People always criticize whether it is good or bad,” she said, adding that the project was a blessing for poor people and that was enough for her.