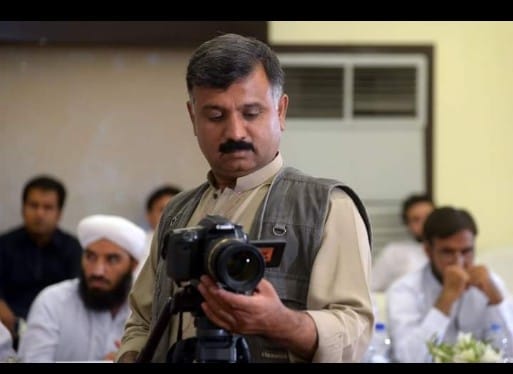 Shahzada Fahd, a Peshawar based journalist, twice contracted Covid-19 in the first and second wave.

Those were the early days of the pandemic and being a Corona positive also carried the risk of social stigma. The same happened with Fahd and his family.

One day, Fahd’s 10 years old niece came home crying. The sobbing girl told the family that the neighborhood shopkeeper refused to give the merchandise, she had gone to purchase. “He told me that I have Corona virus on my currency notes,” the girl told her family.

Fahd’s 12-year-old son became depressed and asked his father if they were all going to die. “I had no answers to their questions,” Fahd said.

The second encounter was even more perilous and Fahd was admitted to a hospital for the treatment of swelling of brain.

Those days I just kept thinking about my family, Fahd said.

Fahd said that this was huge sum and even the organization in whose service I had contracted the virus was not ready to pay the costs.

He said that journalists were working to keep the people informed even when everything else was shut due to the pandemic.

Those who we worked for, never helped us in those difficult times and we even had to borrow to bear the costs of test and medicines, he said.

Like Fahd, several other Peshawar journalists contracted Covid-19 during the course of their work. Those journalists also faced exploitation in pandemic. As at one hand they continued to work without any regard for safety and security against the virus while after contracting virus were denied help or aid by their organizations. Many of them have to borrow to pay their treatment costs.

Details obtained under the Right to Information showed that a total of 60 members of the Khyber Union of Journalists (KhUJ) and Peshawar Press Club tested positive for Corona.

The KhUJ distrusted Rs 5000 each among its affected members besides hand sanitizers and facemasks.

Fakhruddin Syed, a senior Peshawar journalist lost his life to while battling Covid-19. Mr Syed’s heirs received Rs 150,000 in aid from provincial government. Besides, five Covid-19 positive journalists were paid Rs 20,000 each by the Pakistan Federal Union of Journalists and a foreign NGO.

PPC has 500 members, while the KhUJ has 530 members, including women.

As most of the journalists lived in small houses which had no extra rooms for isolation and quarantine. Therefore, the union tried to made arrangements for providing quarantine space for its Covid-19 positive members at a local hotel.  However, no hotel agreed to provide its room for quarantine, forcing most of journalists to isolate themselves at homes.

Though the provincial and federal government announced aid to help journalists with tests, medicines and other expenses during the pandemic; however, little of it materialized.

Khyber Pakhtunkhwa governor Shah Farman provided 50 bags of ration to journalists during the pandemic. Twice, union provided hand sanitizers and facemasks to its members. However, KhUJ has no funds to provide all its members with safety kids and N-95 masks.

Video journalist Rizwan Shiekh that media organizations did not helped their employees during the pandemic. On the other hand, Mr Sheikh said that union and press club also failed to extend helping hand to the media workers.

He said that majority of no one helped majority of journalists during the pandemic. “When other people were being asked to stay indoors, photographers and cameramen were being dispatched to field to face the same threat for footages and photos,” Mr Sheikh said.

He said that they went to hospitals reserved for Corona patients several times. They also interviewed Corona positive patients and doctors treating them. He said that they needed proper safety kit and N-95 masks for these assignments but had no access to them.

Journalists recount their ordeals during the pandemic

Two days before Eid, Mr Sheikh returned home at midnight after his duty with body aches and fever. He took a painkiller and went to see a doctor in the morning, who gave him an injection.

The next day, he again went to work. By the time, Mr Sheikh was diagnosed with Covid-19; two of his children also fell ill. The illness pushed his wife into anxiety attack and she continued to exhibit Corona symptoms despite testing negative.

“My children protested to not allow me to admit their son into hospital saying she would die there,” he said.

His family is still facing anxiety related problems. “I would not have gone through this hell, if I was not a journalist,” Mr Sheikh said.

Aneela Shaheen, a female journalist said that most of the reporters from Peshawar witnessed those chaotic scenes of people dying and gasping for breath from close quarters. She said that many of them also developed psychological issues due to this.

Ms Shaheen said that journalists have not been provided mental health related training or awareness.

Begum Tahir Rizwan, wife of a senior journalist narrated one day when she opened the door her husband pushed her away and ran to the second floor of the house.

She said that her husband told her to steer clear of him and also keep the children away from him.

Mr Rizwan told her wife that he had interviewed someone in the day who was Corona positive and that he was also going to test positive.

Mrs Rizwan tried to console her distressed husband. However, her children witnessed this and started weeping.

“I am still trying to forget these painful scenes,” she added.