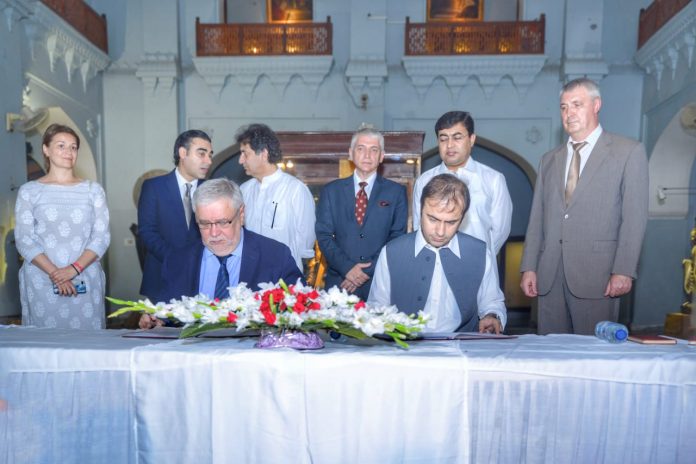 PESHAWAR: A Memorandum of Understand (MoU) has been signed between Russian State Museum Moscow and Peshawar Museum on collaboration for conservation archaeological sites in Khyber Pakhtunkhwa on Monday.

In this regard, a ceremony was held here at the historical Peshawar Museum. It was attended by Khyber Pakhtunkhwa Senior Minister of culture, archaeology and sports Muhammad Atif Khan and Director General Russian State Museum Moscow Embassy Aleksandr V. Sedov.

The staff of Moscow Embassy in Islamabad and Secretary Archaeology and Museums Kamran Rahman and  Khyber Pakhtunkhwa Director Archeology and museum Dr Abdul Samad were also present on this occasion.

Speaking on the occasion, the Minister for Tourism Atif Khan said as per the MoU the two sides would conduct researches and promote pilgrimage tourism, adding that KP province has various archeological sites, including Buddhist relics which attract religious tourists from Indonesia, Sri Lanka, Japan, China and Russia.

He said the government has introduced new visa policy for the Buddhist community to perform their religious ritual at the religious sites here in the province.

Director General Russian State Museum Moscow Embassy Aleksandr V. Sedov said on the occasion that under the agreement Moscow would cooperation with KP government in preservation and renovation of Buddhists’ sites. He said Buddhists living in Russia have a strong desire to visit their religious sites located in KP and under the agreement they would be facilitated in this regard.

The Khyber Pakhtunkhwa province is archaeological rich regions with thousands of Buddhist archaeological sites. According to the Directorate of archaeology, there are some 6000 ancients sites in the province which need proper conservations, however, due to lack of the resources, these sites have been plundered by relic hunters over the years.

It was express the MoU will help the province in preserving the old sites and attractive the foreign tourists to the country.