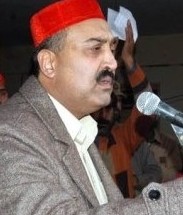 Masoom Shah was arrested by the National Accountability Bureau on charges of accumulating assets worth billions of rupees which were disproportionate to his known sources of income.

Masoom Shah then challenged the decision in the high court through his lawyers Barrister Zahoor ul Haq Barrister Waqar Ali.

A two-member high court bench comprising Chief Justice Mazhar Alam Miankhel and Justice Younis Taheem after hearing arguments accepted his petition and issued a notice to NAB asking it to submit a reply till Tuesday.