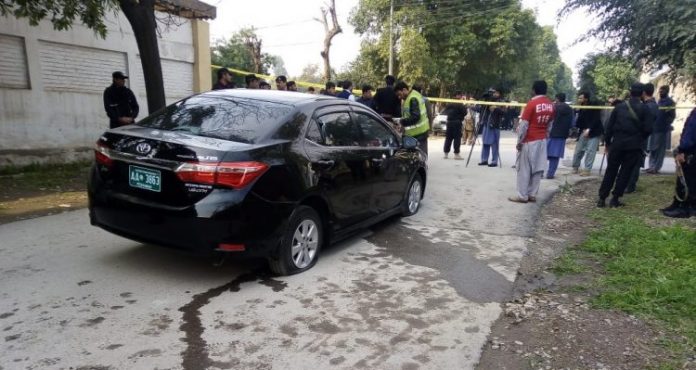 PESHAWAR: A judge of the Peshawar High Court (PHC) Justice Ayub Khan Marwat has been injured along with his driver in a firing incident in Hayatabad area of Peshawar.

Police said Justice Ayub Khan Marwat was going for his duty on Thursday morning when unidentified armed men opened fire on his vehicle, leaving him and his driver critically injured. The assailants escaped from the scene after the firing incident.

A heavy contingent of police reached the spot and shifted the injured to North-West Hospital in Hayatabad. Police cordoned off the entire area and launched a search operation. However, there were no reports about any arrest.

Police said the assailants came on a motorcycle and fire over 20 bullets with a Kalashnikov and a pistol. The judge and the driver received bullets and were critically injured. Hospital sources said the condition of Justice Ayub Khan Marwat was critical.

The Khyber Pakhtunkhwa Bar Council has given a call of strike throughout the province in protest against attack on Justice Ayub Khan Marwat.

The Bar Council Vice Chairman Saeed Khan Advocate in a statement condemned attack on Justice Ayub Khan and demanded the government to arrest the culprits and award them exemplary punishment. He said when the superior judiciary is not safe in KP then what will be the position of security for a common man.

Due to the strike of lawyers, the litigants faced difficulties as the judicial work came to a standstill.

All Pakistan Judicial Employees Association has also given a call of strike against attack on the judge. The Association secretary general Muntazir Shah in a statement said a strike will be observed to condemn the attack on Justice Ayub Khan Marwat. He also demanded the government to provide security to judicial employees.

The government has put the Rescue 1122 on high alert amid ongoing tension between Pakistan and India.

KP Director General Rescue 1122 Khateer Ahmed has cancelled the holidays of the rescue personnel and directed them to remain present on duty in office. The DG said the Rescue 1122 officials will be available round the clock to meet any emergency situation.

Khateer Ahmed said the ambulances and other machinery has been kept ready for any situation. He said all the necessary equipment has been provided to the rescue officials. He said Rescue 1122 is presently serving in 10 districts of KP.