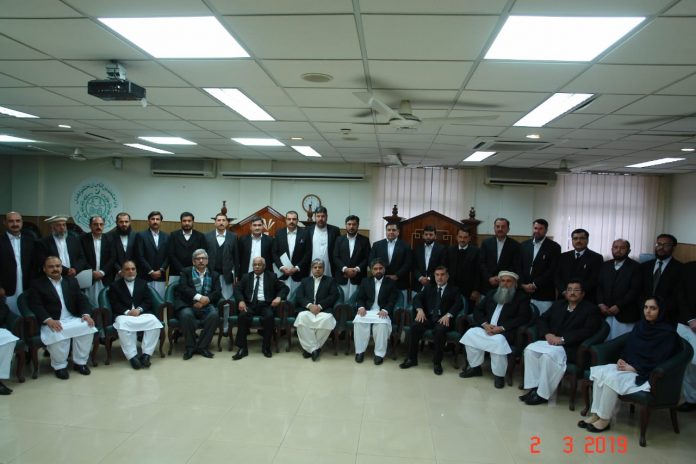 PESHAWAR: The Peshawar High Court (PHC) has conducted an orientation session for judges posted to newly merged districts of Khyber Pakhtunkhwa at the high court on Saturday.

Speaking on the occasion, PHC Chief Justice of Waqar Ahmad Seth said that the selection of judicial officers for tribal districts has been carried out painstakingly. Seth added that extra caution has been taken to ensure the best of the best are selected for the mammoth task of dispensation of justice to tribal people.

He directed judges to proceed according to the law without any pressure and prejudice in administrating justice. “Always maintain a gentlemen behaviour with litigants,” the chief justice asked the judicial officers.

Justice Seth referred to the preparation carried out by the Registrar Khawaja Wajih Ud Din and the secretariat of district judiciary highlighted that all efforts have been carried out to facilitate the Judicial Officer posted in the tribal districts.

To set up makeshifts courts and start hearing of cases, the PHC has posted Judicial Officers to the newly merged Districts of Khyber, Mohmand, Bajaur, Orakzai, Kurram, North Waziristan and South Waziristan.  The notifications stating that the makeshift arrangements have been made the period of 06 months for which sizable promotions are made by the high court.

Registrar of PHC Khawaja Wajih Ud Din, while addressing the orientation session, informed that three-pronged strategy has been devised to extend regular courts to tribal districts. In the shortest span of time, arrangements will be made to shift courts to those districts and as a long term planning, it is proposed to KP government to establish judicial complexes in those districts.