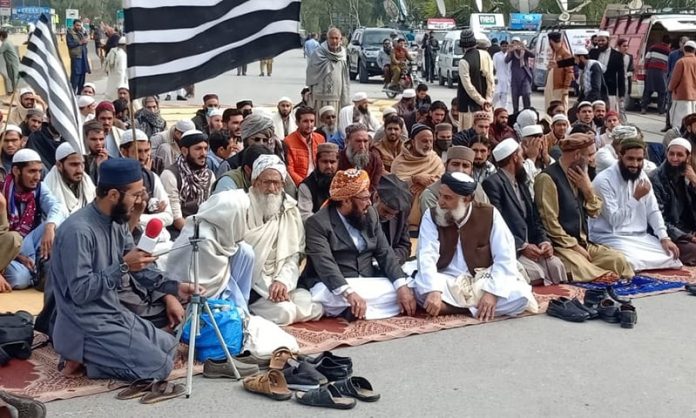 PESHAWAR: The Peshawar High Court (PHC) has stopped the Jamiat Ulema-e-Islam-Fazl (JUI-F) from blocking roads during sit-ins as part of the Azadi March of the party against the government.

A two-member bench of the PHC comprising Justice Waqar Ahmed and Justice Ikramullah heard a petition against ‘Plan-B’ protest of the JUI-F under which the party announced to block roads across the country. After hearing initial arguments, the court issued stay orders and stopped the JUI-F from blocking roads.

The petitioner Shah Faisal Utmankhel argued that blocking of roads is against the basic human rights of citizens and against the Constitution. He requested that the JUI-F must be stopped from blocking roads as it will cause great hardships for citizens.

Justice Ikramullah said in his remarks that the court has issued the stay order and now it is the job of the government to implement it.

On the other hand, the JUI-F is still continuing protest as part of its Plan-B in different parts of the country. The JUI-F chief Maulana Fazlur Rehman has announced relaxation in the blockade and said the inter-provincial highways will remain open during night-time. He said the inter-provincial highways will remain blocked during day-time, while roads will be opened during night-time. He said the government is standing on shaky ground and it needs just a push to fall. He said the whole country was blocked on his call within 24 hours. He said roads leading to Karachi, Punjab and Balochistan are closed. He said Shahrah-e-Karakorum and roads leading to Dera Ismail Khan are also closed. The sit-in on Karakoram Highway is continuing despite persistent rain and freezing temperature. Passengers are facing difficulties due to blockage.

The JUI-F activists are under strong instructions from the party leadership to stay disciplined and not damage any public property and behave properly with the citizens. They have maintained discipline very well so far and there has been no complaint in this regard so far.

According to latest reports, the JUI-F protesters gathered at Hub River Road in the morning on Saturday. The party leadership plans to hold sit-in in the area till 8:00pm.