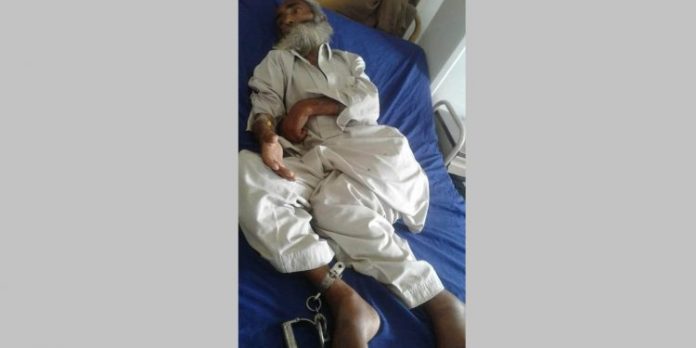 MARDAN: People are demanding action by the government after the photo of cuffed body of a 70-year-old prisoner in Mardan Jail went viral on the social media.

The prisoner, Qajeer Zada, hailing from Khwaza Khela area of Swat, was in Mardan Jail as he was awarded life imprisonment. He suffered from Paralysis in 2017 and was under treatment in the Mardan Jail Hospital for the last one month. He was shifted to Mardan Medical Complex several times due to his critical condition. He was again shifted to hospital two days ago when his condition worsened, but his foot was fastened with the bed of the hospital with a handcuff.

Social circles have condemned the inhuman treatment of the elderly patient. They said the elderly prisoner was paralysed and it was very difficult for him to walk. They say the prisoner could not escape from jail or hospital due to his illness, but then too he was fastened with the bed.

The Prison Department officials said they had nothing to do with the issue and the policemen at the hospital fastened the prisoner.

A spokesman for Mardan Medical Complex said the patient did not die at the hospital. He said the body of the prisoner was brought to hospital and this fact is available on record.

Deputy Inspector General (DIG) Mardan Region Muhammad Ali Khan has said that five suspects have been arrested on charges of facilitating the murderers of three brothers in Umarzai area of Charsadda.

Muhammad Ali Khan said the main facilitator has been arrested from Islamabad Airport upon his return from Malaysia. He said the main facilitator provided ticket to the main accused, went to Malaysia with him and also arranged residence for him there. He said interrogation from the arrested suspects is underway and communiqués have also been sent to the State Bank, Nadra and other relevant institutions for investigation into the case. He said the institutors have been asked to block CNICs, bank accounts and confiscate properties of the accused.