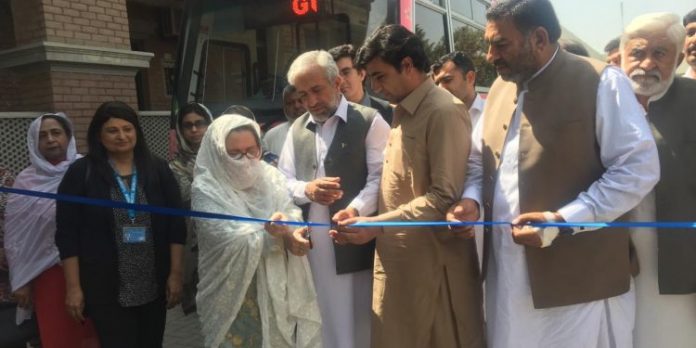 MARDAN: The Pink Bus Service for women passengers was inaugurated by the Khyber Pakhtunkhwa government in Mardan on Thursday.

Officials said seven busses will be under the service from Baghdada area to Abdul Wali Khan University Garden Campus. The fare of the bus will be Rs20 for all passengers. DPO Sajjad Khan said security will be provided to the bus service. The service will also be inaugurated in Abbottabad soon.

Officials said the Pink Bus Service in Mardan cost Rs190 million. The drivers of the busses will be male, while women in specific uniform will collect fare.

A hostess of the Pink Bus Service in Mardan, Aqsa Khan said while talking to TNN that it was a very positive initiative of the KP government to provide travel facility to the women passengers. She said the women passengers will easily travel in these busses without any trouble in a comfortable atmosphere. She said previously the women had to face a lot of problems and harassment while travelling in public transport busses, vans and rickshaws etc but now their troubles will end.

People in KP are generally more concerned and overprotective for the safety of their women and children. The Pink Bus Service will offer a safe and comfortable experience for women and they will reach their destination in company of other women in a safe and secure environment.

The government of Japan had provided 14 pink busses to the KP government out of which seven each have been specified for Mardan and Abbottabad. The project was facing delays, but now finally it has been inaugurated in Mardan and it is expected to be opened in Abbottabad soon.