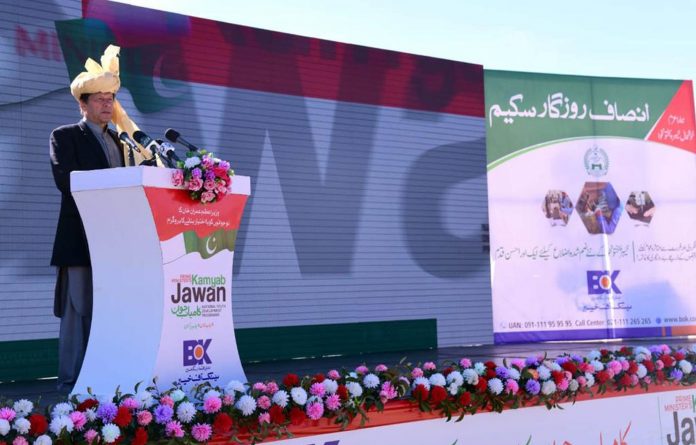 WANA: Prime Minister Imran Khan during his visit to South Waziristan tribal district on Wednesday announced the opening of 3G and 4G mobile facility in the area.

The premier made the announcement while addressing a ceremony in connection with distribution of cheques among the people of merged tribal districts under the Kamyab Jawan Program in Wana, the main town of South Waziristan.

Imran Khan said the Jirga system in merged areas will be strengthened according to local traditions.

The premier said development of poor segments of the society and underdeveloped areas is the priority of the government. He said special emphasis will be made to the education sector and provision of livelihoods to the people of merged districts. He said Kamyab Jawan Program is just the beginning and its scope will be further expanded.

Imran Khan said the people of merged districts offered countless sacrifices for the country and they deserve reward for these sacrifices. He said the decision of merger of tribal districts with Khyber Pakhtunkhwa was the best one, and this fact is being proven true with passage of time. He acknowledged that some people are against the merger, but he appreciated the people for going for the best option.

Meanwhile, addressing a meeting of tribal elders, the premier said an education city on 5,000 kanals land will be established in merged districts.

Imran Khan said the government is committed to provide medical cover to the people. He said the issues of provision of clean drinking water, and construction of roads will also be addressed.

About political issues, Imran Khan said government will not succumb to pressure exerted by opposition for letting them off the hook in corruption cases. He said Pakistan was coming out of the debt trap, and economy was moving in right direction.

The premier inaugurated a hospital equipped with modern facilities at Maula Khan Sarai and also visited FC Headquarters in Wana and paid rich tribute to martyrs.