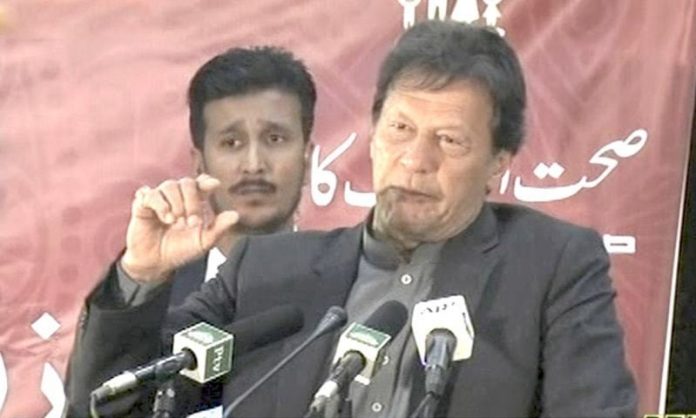 PESHAWAR: Prime Minister Imran Khan on Friday has arrived in Peshawar on a day-long visit and inaugurated the Sehat Insaf Card scheme for the people of tribal districts of the province with the aim to improve lives of people tribal areas.

“They have suffered a lot in the fight against terrorism. We have decided to uplift the tribal areas,” the premier remarked. PM Khan said that free healthcare is a blessing, adding that the Health card is insurance for the poor who struggle to earn for food and a sudden health complication take away all their earning. “The scheme will allow every household to get medical treatment from private or government-run hospitals up to Rs720,000,” PM Khan said.

The premier was welcomed by the KP Governor Shah Farman and Chief Minister Mahmood Khan. He was accompanied by Special Assistants Naeem ul Haq and Iftikhar Durrani. Under the Sehat Insaf Card program, each family of the seven tribal districts will be able to avail free medical treatment at all major government and private hospitals.

The Prime Minister also presided over a meeting about law and order situation in Khyber Pakhtunkhwa and held a separate meeting with Governor Shah Farman, Chief Minister Mahmood Khan and members of the provincial cabinet.

The Chief Minister briefed the premier about the efforts so far taken for the mainstreaming of the tribal districts and its economic uplift. The CM said that efforts continue to provide all facilities of life to tribal people and bring them at par with the people of other parts of the country.  The Chief Minister added that a comprehensive ten years plan has been prepared for the economic prosperity of the tribal districts.

He said that the recovery plan aims to enhance the administrative structure, provide more job opportunities, education and health facilities for the people of transferred districts. “It is important to remove the decades’ long deprivation of the people of tribal districts,” said the Chief Minister.

The CM informed the premier that an advisory committee has been appointed which will hold consultation with tribal people and provide recommendations for the 10-year plan. The Chief Minister asked the premier that the federal government should provide resources to help the provincial government in mainstreaming the tribal districts of the province.