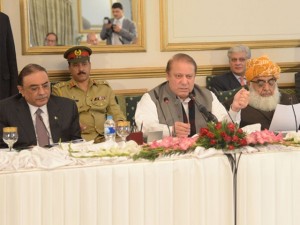 PESHAWAR, 13 May: Prime Minister Nawaz Sharif has called an all parties conference (APC) today to remove reservations of the political parties over the Pakistan-China Economic Corridor.

The prime minister along with other PML-N leaders will try to allay concerns of political parties on the Pak-China Economic Corridor during the conference.

The Chinese president during his visit to Pakistan last month signed $48 billion agreements including the Gwadar-Kashgar Economic Corridor and energy projects. Some political parties of Khyber Pakhtunkhwa and Balochistan raised some objections over proposed changes in the trade route by excluding some areas of these provinces from the project and including areas from Punjab. These parties also objected to giving more emphasis to Punjab in all agreements with China and ignoring other provinces.