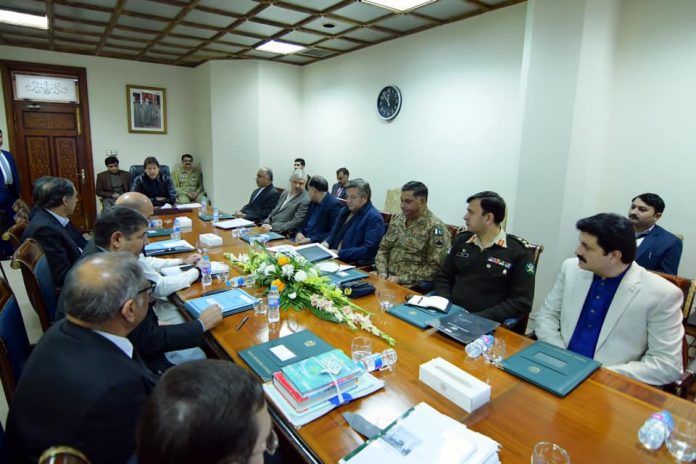 PESHAWAR: Prime Minister Imran Khan has directed provision of health cards to 500,000 families of the tribal districts by the end of January, 2019.

The prime minister issued these directions while chairing a high-level meeting regarding development and reconstruction of the tribal districts at the Prime Minister Office in Islamabad on Monday.

Imran Khan said development and progress of tribal areas, which have been recently merged with Khyber Pakhtunkhwa, and bringing them at par with rest of the country is top priority of the government. The premier directed to expedite efforts for the early enforcement of local bodies system in the merged districts. He also directed to fill vacant posts in education, health and police departments in the tribal districts. He said the process of recruitment should be started immediately.

The meeting reviewed the administrative affairs, health, education, law and order and development schemes of merged areas. It also reviewed progress of the merger process and policy for the next three months.

Prime Minister Imran Khan has said development and progress of erstwhile tribal areas merged with Khyber Pakhtunkhwa and bringing them at par with rest of the country is top priority of the government. pic.twitter.com/Ixzke9R44G

Imran Khan said KP Chief Minister Mehmood Khan, provincial ministers and secretaries concerned should make a regular visit to the tribal districts and its various departments and personally review development works in health and education sectors. The meeting decided that KP cabinet, in its monthly meeting, would review the progress of development works and reforms in the merged districts.

The Pakistan Tehreek-e-Insaf (PTI), the ruling party both in the Centre and KP, vigorously supported the cause of the merger of erstwhile Fata even when it was in the opposing in the Centre. Now after coming into power, the government is working to expedite the process. The government has assured that no one will lose his job after the merger and performance of every department will be improved and new job opportunities will be created.