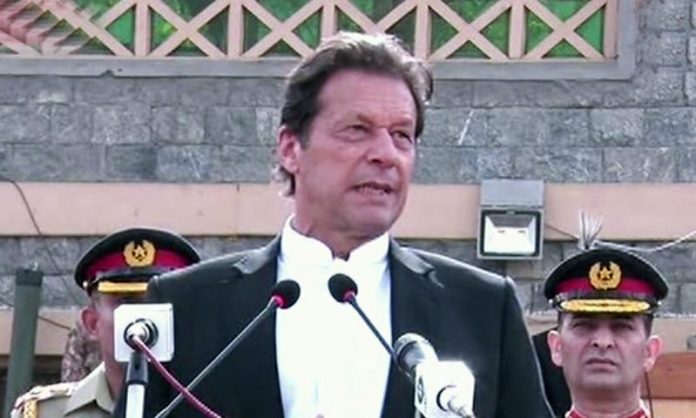 PESHAWAR: Prime Minister Imran Khan on Friday said his resignation was out of question and he will never give an NRO to anyone come what may.

Addressing a massive public gathering in Gilgit-Baltistan on the occasion of 72nd Independence Day of Gilgit, the prime minister questioned the Jamiat Ulema-e-Islam-Fazl (JUI-F) chief’s Azadi March and asked from whom he is demanding independence.

The premier said the Maulana is making India happy with his attitude and it seems as if he is an Indian citizen.

Addressing the Azadi Parade, the prime minister said no one can stop Kashmir from becoming independent. He strongly condemned the Indian government and prime minister Narendra Modi for revoking the special status of Occupied Kashmir and repression of Indian troops against the innocent Kashmiris. He said Kashmiris have been locked inside their homes since August 05 and they are facing worst human rights violations. He said India will see the spirit and more resolve of the Kashmiri people for freedom once it lifts the curfew.

He reiterated the full support of Pakistan for the Kashmiris’ right to self-determination and said Pakistan will always stand by Kashmiri brothers. He also reiterated that he is the ambassador and spokesman of the Kashmiri people and will plead their case at every forum.

On the occasion, the prime minister paid rich tributes to the valiant freedom struggle of the people of Gilgit against Dogra regime.

He said Pakistan has been established with Islamic ideology and it will become an example for the rest of the Ummah by following the principles of state of Madina.

Imran Khan also praised the scenic beauty of Gilgit-Baltistan and said that tourists will be visiting the region which will bring prosperity and ensure a brighter future for its people. He said more tourists will come to the region due to tourism-friendly policy of the government.

He also mentioned that Gilgit-Baltistan is also a gateway to multi-billion dollars China Pakistan Economic Corridor (CPEC) project which will bring development in this area in the days ahead. He said CPEC will be a game changer for Pakistan and the whole the region.