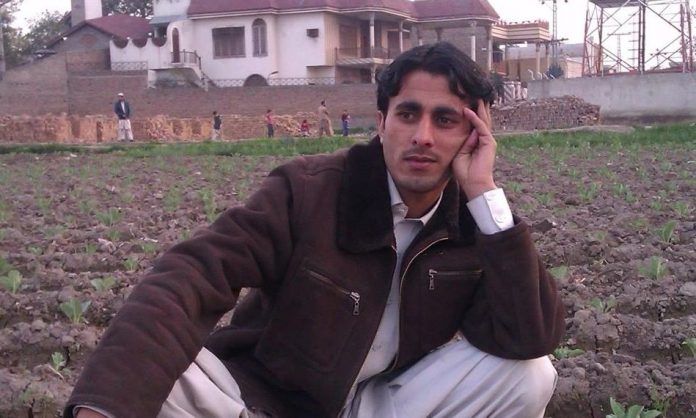 Rafiullah, a cousin of Sheraz Safi, told Faqirabad Police while filing a report that Shiraz was outside his home on Saturday night when unidentified armed men, who came on a motorcycle, opened fire on him, leaving him seriously injured. Sheraz was taken to the Lady Reading Hospital (LRH) where he died during treatment.

The body of the deceased was handed over to his family after post mortem. Police said an investigation has been launched into the incident from various angles.

The body of the deceased was taken to his ancestral village Ziarat Killi in tehsil Safi. His funeral prayer will be held at 4:00pm today.

A child lost his life and four others were injured in a hand grenade blast in Chata Banda village in Takht Nasrati tehsil of Karak on Sunday.

The children found a hand grenade and were playing with it when it exploded. The deceased child was identified as seven-year-old Shah Jehan, while the injured included nine-year-old Sudais, 11-year-old Noorullah, five-year-old Muhammad and three-year-old Arsalan.

The injured children were taken to District Headquarters Hospital.

Three people, including two children, were injured during celebratory firing at a wedding function in Nowshera on Saturday.

Police said guests resorted to festive firing during the wedding of Shahzeb in Sonehri Mohalla in Khat Killi, Azakhel, due to which three people, including two children sustained serious injuries. The injured persons included Mehmood, Shahzeb and Shoaib. The injured persons were taken to District Headquarters Hospital Nowshera from where they were referred to the Lady Reading Hospital Peshawar due to their critical condition.

Azakhel Police have filed a case against the bridegroom, his father and other people involved in festive firing.