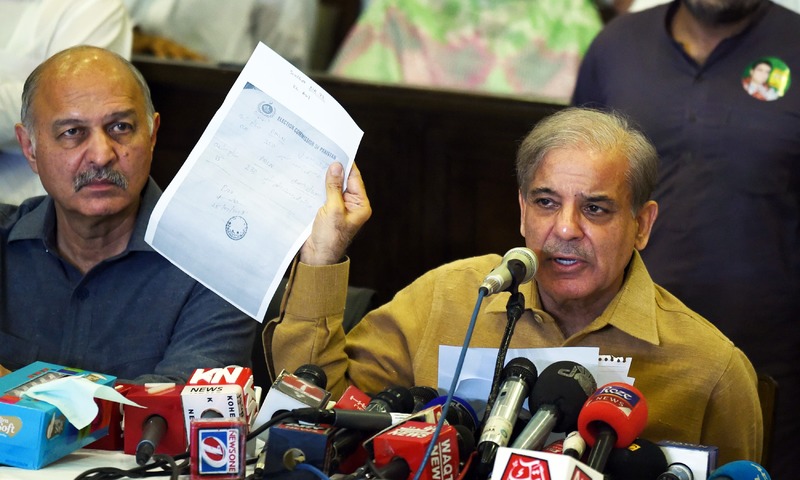 The PML-N President Shahbaz Sharif, while addressing a press conference in Lahore late on Wednesday night said his party will not accept the results shared by the Election Commission of Pakistan (ECP).

He complained that Form-45 was not shared with the agents of PML-N in many constituencies. He said the results in many constituencies, where the PML-N candidates are winning, have been withheld. Shahbaz termed it the dirtiest election in the history of Pakistan. He alleged that first pre-poll rigging was conducted and then the polling was slowed down and no extension was given. He alleged that the polling agents were thrown out during counting.

Earlier, PML-N’s Marriyum Aurangzeb and Mussadiq Malik both alleged that the party’s polling agents had been forced out of polling stations in various constituencies.

The PML-N leader Mushahid Hussain Syed called the polls “a selection rather than an election”.

The PPP leaders at press conference alleged that a clear pattern of interference was seen in the vote count.

The PPP Senator Raza Rabbani alleged that in the polling stations in Karachi’s Lyari, the PPP polling agents were expelled after the voting time ended. He said the ECP and caretaker government failed to ensure the transparency of the elections.

Senator Sherry Rehman said that it appears that except one party, all political parties are being cornered.

The MMA chief Maulana Fazlur Rehman said he will summon an all parties conference soon over rigged results. In a statement, he said that ‘the rigged results are unacceptable’.