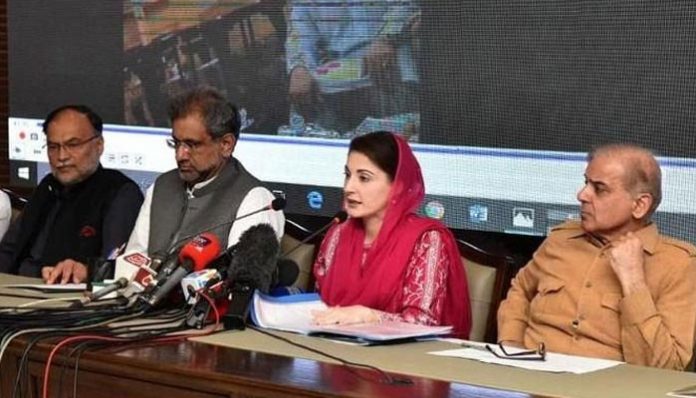 PESHAWAR: Leader of Pakistan Muslim League-Nawaz (PMLN) Maryam Nawaz has released an alleged video clip of the accountability court judge Arshid Malik in which the judge could be seen saying that Nawaz Sharif was innocent in Al-Azizia Steel Mills reference in case.

The video was unveiled in a press conference in Lahore on Saturday which she termed as “divine help”. The senior leadership of the PMLN including Shahbaz Sharif, former president Shahid Khaqan Abbasi and former interior minister Ahsan Iqbal was also present during the press conference.

She said that the video was recorded by a worker of Pakistan Muslim League Nasir Butt during his meeting with the accountability court judge Arshad Malik, who had in December last year sentenced Nawaz to seven years in jail in the Al-Azizia Steel Mills corruption reference.

“The judge was feeling guilty and having nightmares after announcing verdict against Nawaz Sharif,” Alleged Maryam Nawaz. She added he invited Butt for a meeting at his residence, where the video was recorded.

After the press conference of PMLN leader Maryam Nawaz, The federal government spokesperson, Firdous Ashiq Awan in a press conference has condemned the allegations made against Judge Arshad Malik saying the PMLN has accused not a single judge but the entire judicial system of the country. She accused that the new drama has been made to gain people sympathies and to save the ‘sinking party’.  Firdous said that it is immoral and illegal to shot someone video without consent but said that the government investigating the matter.

Firdous Ashiq Awan has also accused Nasir Butt, the man who is said to have recorded the video, and said that Butt is a murderer who was given protection by PML-N from the law. Last year, in December, the Accountability Court had convicted former prime minister and sentenced him to seven years in prison in Al-Azizia case.