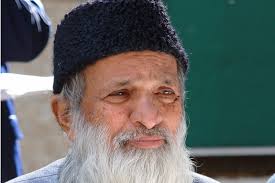 PESHAWAR, October 25: The police say they have arrested key suspects in robbery case at the house of known social worker and philanthropist Mr Abdul Sattar Edhi.

The police authorities say they have started carrying out raids to arrest other culprits of the gang as well.

A week ago, unidentified people robbed Mr Edhi’s house and also ransacked the charity headquarters, Edhi Centre. Armed men made off with more than 10 million rupees, 5kg gold and other valuables on 19 October.