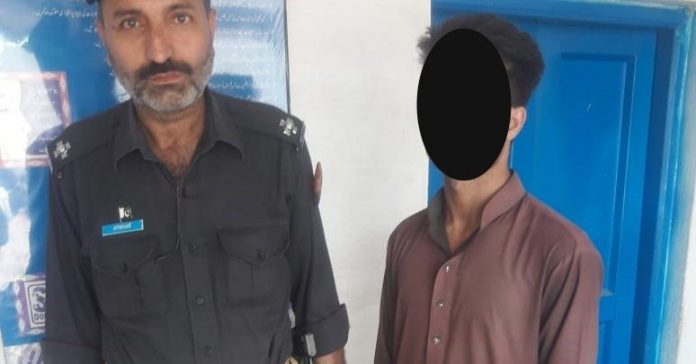 NOWSHERA: A man suspected of sexually assaulting a seven-year-old child in Balu village of Akbar Pura was arrested by police on Thursday. Nowshera police claimed that the suspect was arrested within two days of investigation.

Giving the details of the case, police said that two days back, a resident of Akbar Pura, who works as daily labourer, has registered a case with police that his seven-year-old son has been raped by an unknown person. He added his son was playing outside the home, when he entered home crying that a man has sexually abused him, however, he could not identify the accused.

Police registered the First Information Report (FIR) and started a systematic investigation to search the culprit while the boy was sent to the hospital for medical examination.

Akbar Pura police station officials said that after two days of search, they arrested a man from the neighbourhood and after initial investigation; he confessed his crime before the police. Police have identified the accused as Tahir, a resident of Balu, in Akhbar Pura.

Police added that a case has been registered and further investigation is underway.

Child sexual abuse is highly prevalent Khyber Pakhtunkhwa. Last month, a teenager was shot dead in front of his mother and aunt after he refused his friendship proposal. His family told the police that he was harassing the boy for a long time, for which they registered a complaint with an elected member of the area, but there was no one to stop him.

Last year, a report released by non-governmental organisation Sahil said that around nine children in Pakistan face sexual abuse daily, even though there is a scarcity of credible data. With the aim to curb violence against children, the Senate in 2016 criminalised child sexual abuse, child pornography and trafficking. Earlier, only rape was criminalised. But despite such tightening of laws, a significant number of child abuse cases are occurring from across the country and most them go unreported.