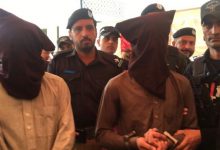 MARDAN: Police claimed to have resolved murder mystery of five-year old Hasina and arrested the culprit from Fatu Killay of Mardan district on Monday.

The police said that the culprit identified as Khan Muhammad, who is said to be a close relative of deceased Hasina, confessed to have raped before killing her.

He also divulged name of his accomplice namely Nasrullah who is said to be a religious scholar and uncle of the deceased child.

Nasrullah has also been arrested, the police said. The police said that Khan Muhammad came to Nasrullah few days ago and confessed before him that he had killed Hasina after raping her, the police said, adding that both dumped her body in nearby fields.

Hasina went missing from her house and her body was found on second day in fields near her home.