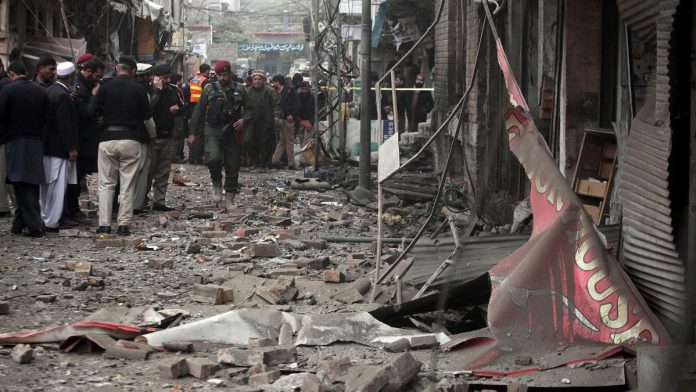 PESHAWAR: The Khyber Pakhtunkhwa police claimed that the owner of the car used in Kali Bari bomb blast has been arrested from Jamrud on Saturday. The arrest was made hours after the blast outside a mosque in Peshawar in which six persons, including two women, were injured.

According to the KP police the owner of the car, Neik Muhammad has been arrested from Wazir Dhand area of Jamrud. Police sources added that he has been shifted to unknown location for further interrogation.

All six-person injured in bomb blast were shifted to Lady Reading Hospital (LRH), where they are stated to be in a stable condition. Governor Khyber Pakhtunkhwa, Shah Farman visited the LRH to inquire about the health of those injured in the blast.

The CCTV footage of the blast shows an unidentified man parking and exiting the said vehicle, having registration number GAH 136, before wrapping himself in a shawl. The explosion takes place as he walks out of the frame. The white corolla car exploded at 8:45 am with a big bang.

Police said that 10 kilograms local made explosive were used. The Bomb Disposal Unit Chief Shafqat Malik agreed that it was an IED explosion and added: “The entire vehicle blown up and only (its) engine part remained intact.” He added that the nature of the blast is different from their past as this time, they have used only explosives and no other military ordinance were employed in the bomb.

The Kali Bari blast in Peshawar was the first of 2019 in the provincial capital. The last IED explosion took place in October, that left a civilian and a paramilitary soldier injured. Over the past few years, the province has seen a sharp decline in the number of violent attacks. According to a study conducted by Pakistan Institute for Conflict and Security Studies, last year 40 attacks were recorded in KP in which 72 people were killed and 174 injured. Suicide attacks across the country dropped from 23 in 2017 to 18 in 2018.