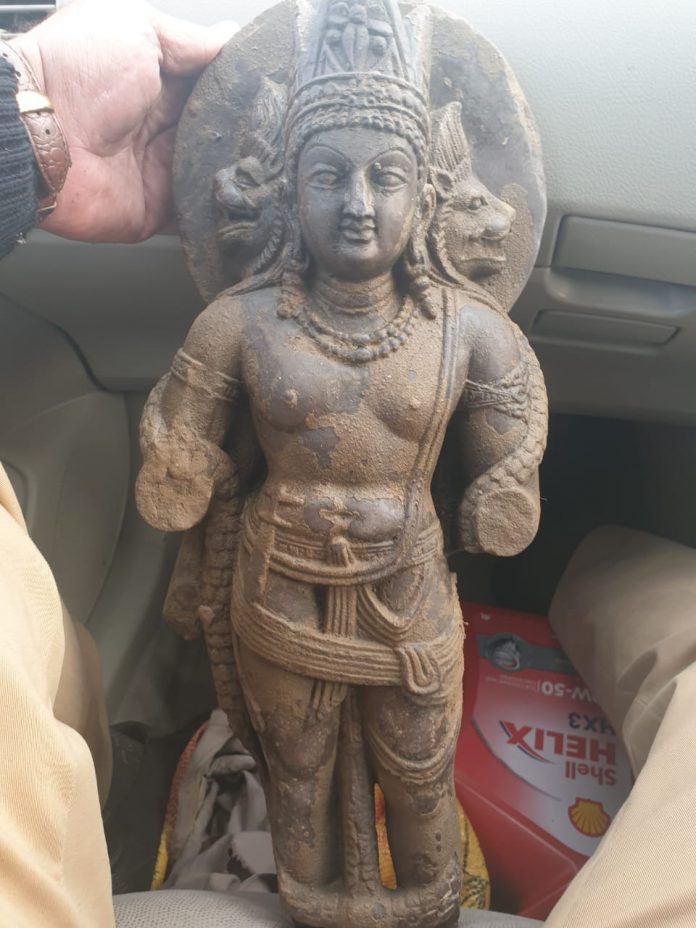 Giving further details of the recovery, the police officials said that the Superintendent of Police Zahoor Babar Afridi has received a tip about the smuggling bid after which they started checking all the entry and exit points of the provincial capital.

Station house officer of Chamkani police, Ahmadullah Khan was present on check post, when they stopped a suspected motor car on Motorway Toll Plaza checkpoint. After a thorough search, Police recovered an antique statue from a hidden portion of the car and arrested the accused, who was identified as Shahid, a resident of Utmanzai in Charsadda.

The Police informed that the initial investigation shows that the artefact was purchased in Batkhela, in Malakand and was being smuggled abroad. Police said that a case under the Khyber Pakhtunkhwa Antiquity Act 2016 has been registered and further investigation is underway.

The KP Directorate of Archaeology and museum said the antiquity statue was 800 to 1000 years old. “The artefact recovered is of Vishnu (Hindu Devta) and it is 800 to 1000 years old,” said Nawaz Uddin, an official of the directorate of archaeology and museum, Khyber Pakhtunkhwa.  Nawaz added that the statue recovered belongs to grandeur Gandhara civilization and its worth is millions of Rupees in international markets.

The Peshawar valley was the centre of ancient Gandhara civilization, and the cradle of the Buddhist Civilisation, which gave birth to the famous Gandharan Art. According to KP directorate of archaeology and museums, there are some 6000 Buddhist and Hindu era sites. However, most of these sites are unprotected and has been subjected to illegal excavations.  The provincial government has passed the KP antiquity act 2016 which specifically focuses to stop illegal digging and smugglings. The act provides for the establishment of antiquity wing within the Directorate for control of trade in antiquities, however, so the wing couldn’t be established.