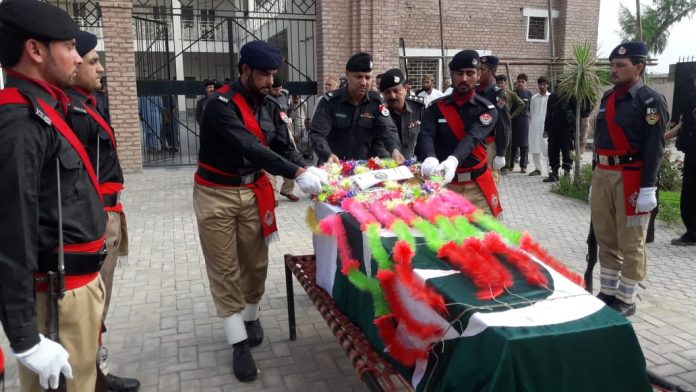 CHARSADDA: A tracker driver allegedly slammed his vehicle into a check post crushing a policeman to death here in Sardaryab area of the district. The police sources told media that constable, Jahangir, was performing his duty on a check post in Sardaryab when he signalled a tracker to stop at the checkpoint for a routine check.

However, the tractor driver allegedly enraged and despite stopping at the checkpoint, he slammed vehicle into the policeman as a result, the official was critically injured. The police officials added that taking benefits from the night, the driver made his escaped from the crime spot. The injured policeman was rushed to hospital but due to critical injuries, he was pronounced dead by the doctors.

Jahangir was recruited in the KP police force under the SPF scheme. He was recently married and left behind a minor son. His funeral prayers were offered in Charsadda police headquarter where District Police Officer (DPO) and other senior police officials were present.

While paying tribute to his services, the police officials said that Jahangir was a very responsible policeman and has performed his duty very diligently. The police officials said that he has sacrificed his life in the line of duty adding the Khyber Pakhtunkhwa Police will never be left his family alone and would extend every possible assistance and support.  The Police said that a case has been registered and further investigation into the case is underway to arrest the accused.

CHARSADDA: At least 22 suspects – including three proclaimed offenders – were arrested during search operations in different areas of Charsadda district, said the police officials to the media. The police added that arms, ammunition and hashish were seized from their possession. Police informed that it was a routine security check to control crimes. Police added that cases have been registered and further investigations are underway.