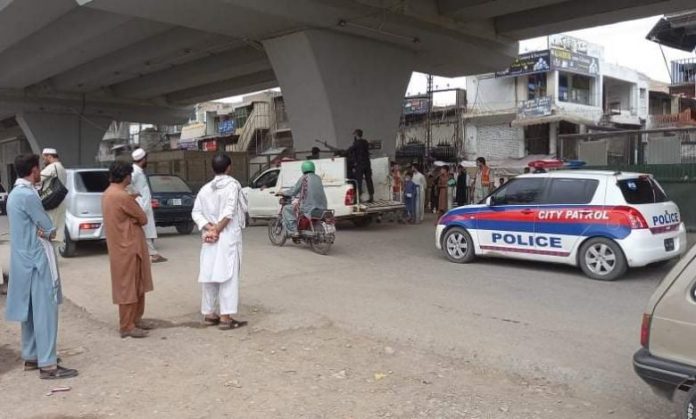 PESHAWAR: A policeman was martyred and another was injured in a grenade attack on a police mobile van in Karkhano Market in Peshawar on Friday.

Police said unidentified miscreants attacked a police van with a hand grenade in Karkhano Market near Hayatabad in which one policeman Havaldar Ibne Amin was martyred.

Police and rescue teams immediately reached the site of the blast and shifted the body to Hayatabad Medical Complex. Capital City Police Officer (CCPO) Abbas Ahsan said three policemen were present in the mobile van at the time of the attack. He said a team of Rapid Response Force was on routine patrol when it came under attack. He said the mobile team in-charge lost his life in the attack, while another constable was injured.

An unidentified passerby was also injured in the incident and was shifted to the hospital. He was discharged after initial treatment.

Police barricaded the entire area and launched a search operation. However, no arrest was made till filing of this report.

Senior Superintendent of Police (Operation) Yasir Afridi confirmed that a hand grenade was hurled towards the police van. He said the police team had been carrying out duties related to polio vaccinations. He said police would continue to stand resolutely amid security challenges.

The terror incident has happened in Peshawar at a time when the security situation in neighbouring Afghanistan is critical owing to fierce clashes between the Taliban militants and government forces. Pakistan has already expressed apprehensions that the violence in Afghanistan may spill over to Pakistan. Several terror incidents have happened in Pakistan since the foreign troops started withdrawal from Afghanistan and Taliban immediately stepped up their attacks and the Afghan government forces also retaliated with full might.

Few days earlier, a special meeting of the KP cabinet was convened to discuss law and order situation in the province in the wake of changing security situation in Afghanistan.

The cabinet assured full support to the Police Department and said that all the requirements of the police force would be fulfilled on priority while utilising all available resources.

Earlier, KP police chief Moazzam Jah while talking to journalists in Peshawar said that the provincial government was keeping a close watch on the evolving situation in Afghanistan.