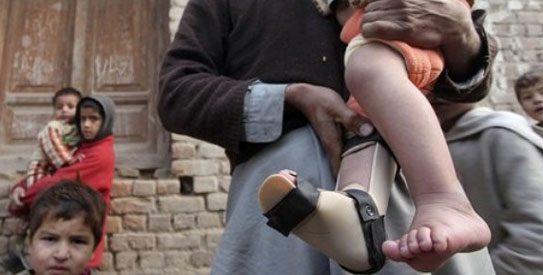 PESHAWAR: A polio case has surfaced in Bannu district of Khyber Pakhtunkhwa after which the tally in Pakistan this year has mounted to 48.

According to the Health Department sources, a one-year-old child has been diagnosed with poliovirus in Union Council Mamakhel of Bannu. It has taken the tally of infected children in five districts of KP to 20. Lakki Marwat has reported 12 cases, Tank has reported four, Karak two and South Waziristan has reported one case this year.

It is the first polio case in Bannu this year. On May 01, two polio cases surfaced in Khyber Pakhtunkhwa and Punjab.

The fresh polio case in Bannu has surfaced at a time when all the vaccination campaigns are suspended due to the coronavirus threat. The government is now easing the lockdown gradually and markets and other businesses and transport are being opened. It is expected that the government may also resume vaccination campaigns keeping in view the needs of children who are at risk of contracting the virus, particularly in vulnerable areas.

The authorities in Pakistan have to battle poliovirus and coronavirus at the same time. However, the refusing parents are the main stumbling block. In the current year’s tally, nearly half of the cases are from KP, which means the situation in the province is more precarious than the rest of the country.

Experts believe that polio vaccination efforts cannot succeed completely until the refusing parents are convinced to cooperate with vaccination teams.