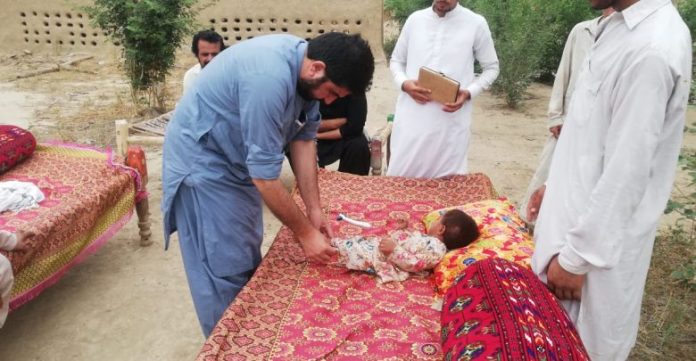 LAKKI MARWAT: Another polio case has surfaced from Lakki Marwat district of Khyber Pakhtunkhwa, the second case in the district this year.

Local sources said poliovirus has been confirmed in the samples of one-year-old Javeria, daughter of Nazeefullah, from Kot Kashmir area of Lakki Marwat.

Polio eradication officer Dr Ihsan said the affected girl missed the anti-polio vaccination injection due to which the disease affected her. He said the girl fell ill on June 23 after which her samples were sent for laboratory tests. He said laboratory reports have confirmed that the girl has been affected by poliovirus.

Dr Ihsan said the disease affected the girl despite the fact that she received polio vaccination drops seven times since her birth. It is the second polio case in Lakki Marwat this year. The emergency of polio case despite receiving polio drops has caused deep concern among the people of the area.

Focal person to prime minister for polio eradication Babar Bin Atta had expressed serious concern over emergence of fresh polio cases and appealed the nation to ensure that every child gets polio vaccination. He said the government will leave no stone unturned to control the spread of the disease.

Pakistan, Afghanistan and Nigeria are the only three countries in the world where polio is categorised is endemic viral infection. Vaccination efforts in these countries are often hampered due to refusal of parents or threats from militants. The National Emergency Operation Centre has already issued warning of presence of poliovirus in eight cities including Peshawar, Bannu, Lahore, Rawalpindi, Qila Abdullah, Pishin, Quetta and Karachi.