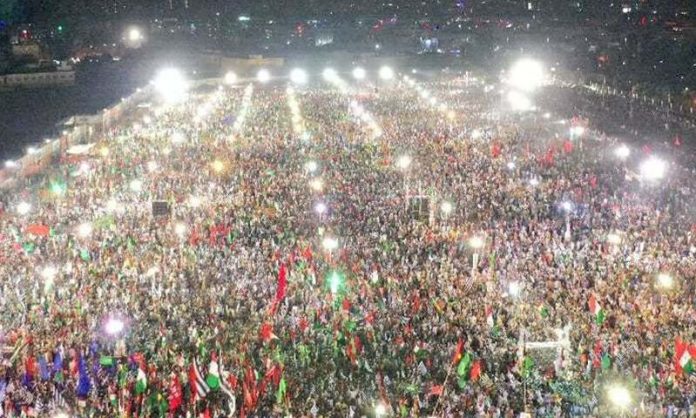 PESHAWAR: Defying repeated warnings from the government, the opposition’s alliance, Pakistan Democratic Movement held five massive public meetings in major cities of the country despite the emergence of a new strain of the coronavirus in Pakistan.

Though the ruling party Pakistan Tehreek-e-Insaf (PTI) canceled all its public meetings and even announced to postpone the one scheduled in Rashakai, Mardan, still people have been criticizing the rulers for violating their own SOPs by holding public meetings earlier in different cities.

PTI’s member of the Khyber Pakhtunkhwa Assembly Fazal-e-Elahi says that corona SOPs were strictly followed in the public meetings organized by his party. However, his claim is refuted by a journalist Nasir Zada, who covered a public meeting of the PTI attended by Chief Minister Mahmood Khan in Dir. According to Zada, some of the participants of the meeting had worn facemasks but nobody bothered to observe social distancing as thousands of people had turned up there.

“People wonder how the government can urge the opposition parties to cancel their activities when its own ministers and officials are holding political power shows and violating the SOPs,” Zada remarks while talking to this scribe.

The opposition parties have also been widely criticized by the people for organizing massive public meetings despite a worryingly high number of new infections in the country. People are holding the leadership of the political parties responsible for the spread of the deadly virus as they allege the rallies are turning into hotspots of the corona.

“It is unavoidable. The masses are fed up with this government as it failed to provide relief to the public. This government must go,” he remarks.

“There was no corona when the government itself was conducting public meetings in different cities. It only started spreading when the PDM announced to launch the anti-government drive,” he contends.

Although, he claims that SOPs are being followed in PDM’s public gatherings but independent observers say it is hard to keep social distance in any rally or public meeting.

General masses have been critical of the political leadership, saying neither the government nor the opposition politicians are interested in resolving public problems. It is a common perception among the masses that politicians need public support whenever they are in trouble.

Faqeer Hussain, who sells vegetables on his pushcart, says his family starved for days during the lockdown period and nobody bothered to visit him. “My application for the cash assistance under the Ehsas emergency program was rejected without citing any reasons. I approached the MPA and MNA of our constituency but to no avail,” he regrets.

There are some politicians who didn’t sit in homes and preferred to go in public and help people by creating awareness and donating different items.

Samar Haroon Bilour, the provincial lawmaker from the Awami National Party (ANP) reached out to her constituents and distributed 20,000 facemasks, hand sanitizers, hand wash units, and protective gears among the masses.

“There are 12 union councils in my constituency and I tried to reach out to everyone during the pandemic. I visited the families of those infected by the virus and guided them about the precautionary measures. I taught them how to handle a corona patient at home and how to isolate oneself from other people,” she tells TNN during an interview.

“I also visited different hospitals in the city and enquired about the patients. It was time to pay back my voters who stood by me in difficult times,” Samar Bilour, who won a Khyber Pakhtunkhwa Assembly seat from the provincial metropolis in a by-election by defeating PTI’s candidate, continues.