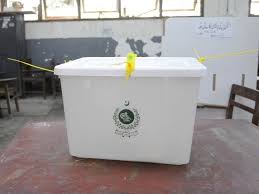 The polling was started at 800 hours which would continue till 1700 hours. More than 11,000 polling stations have been established for over 13 million voters who will elect 40,762 candidates. The provincial government has declared Saturday as public holiday for the polling, being witnessed in Khyber Pakhtunkhwa after 10 years.

Army, Frontier Constabulary and police have taken control of the polling stations which have been declared sensitive and most sensitive by the Election Commission of Pakistan.

The Election Commission has banned setting up of polling camps, parking vehicles, and holding meeting near polling stations, warning that violators would be dealt with sternly.