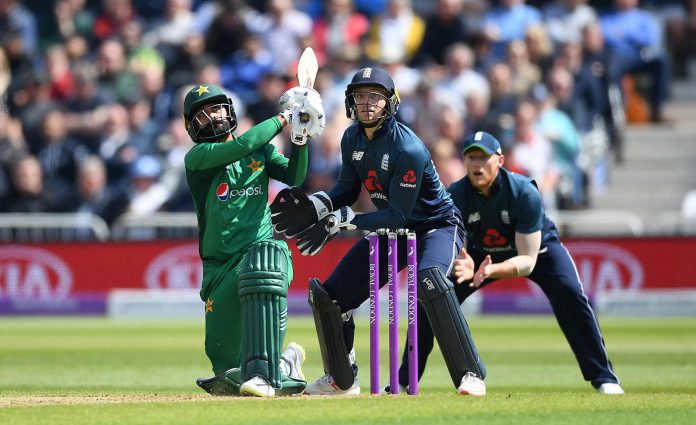 PESHAWAR: England defeated Pakistan after an interesting contest by three wickets in fourth match of the five-match ODI series at Nottingham on Friday.

England after winning the toss invited Pakistan to bat first on a good batting track. Pakistan scored 340 runs for the loss of seven wickets due to brilliant century by Babar Azam who scored 115 runs, while Fakhar Zaman and Mohammad Hafeez also played well for their 57 and 59 runs respectively.

For England, Curran was the pick of bowlers with 4 wickets, Wood took two wickets and Archer took one wicket. Again, apparently it was a good score to defend and Pakistani batsmen again played well, but the score again proved insufficient before the strong batting of England.

England surpassed the target in the last over of the game with three wickets to spare. Jason Roy was top scorer for England with 114 runs, while Stokes also played well for his unbeaten 71.

With Thursday’s win England won the series 3-0 with one match to go in the series.

Jason Roy was declared man of the match for his brilliant batting. “We had a big total to get and I got out and I was very frustrated, but the boys finished it off very well,” he said.

Pakistan’s defeat was with a narrow margin, but the poor fielding of Pakistan ultimately proved to be the difference. In Friday’s match, Pakistan again missed catches, run-outs and also conceded several runs due to miss-field. The same story continued throughout the series where Pakistan lost every match from a position from where they could have won, but were let down by poor fielding.

Pakistan captain Sarfraz Ahmed said it was tough luck for his team. “We put runs on the board but our bowling and fielding was not up to the mark. If we took catches and executed better, that was the difference,” he said.

The next match of the series will be played at Leeds tomorrow (Sunday).

With the series already decided, England will like to rest some more main players and test the bench strength. Pakistan may also give chance to Abid Ali who hasn’t got a chance in the series so far.