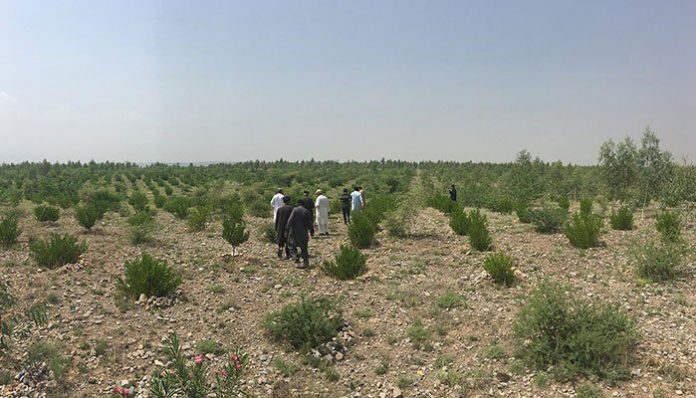 PESHAWAR: The Pakistan People’s Party (PPP) has announced to approach the National Accountability Bureau (NAB) over alleged corruption in the Billion Tree Tsunami Project of the Khyber Pakhtunkhwa government.

The PPP President for KP Humayun Khan made this announcement while talking to journalists along with Senator Robina Khalid and former Speaker of National Assembly Faisal Karim Kundi. He said the PPP will stage rallies on the International Labour Day (1 May) to express solidarity with the working class and against unprecedented price hike in the country.

Humayun Khan said the provincial leaders of the PPP on Saturday held a meeting with the party Chairman Bilawal Bhutto Zardari and informed him about the corruption of the PTI government. He alleged that the KP government was indulging in massive corruption in KP for the last six years, while the accountability organisations are not taking notice of the matter.

The PPP leader said the party leadership has informed the media about the corruption and they will also approach the NAB in this regard. He said the application in the NAB against corruption in the Billion Tree scheme will be on the same pattern as was submitted regarding corruption in the Bus Rapid Transit Project. Few days ago, the PPP KP had approached the NAB against alleged massive corruption and mismanagement in the BRT Peshawar due to which the estimated cost of the project increased enormously and it completion deadline was also missed several times.

Humayun Khan said the provincial parliamentary committee is working to unveil corruption in Billion Tree scheme and soon a report about it will be released. He alleged that Prime Minister Imran Khan has made a false claim in China that four billion trees have been planted in the project despite the fact that one billion trees were to be planted according to original plan. He said the prime minister’s statements abroad were causing embracement for Pakistan.

Earlier, the PPP KP delegation met Bilawal Bhutto Zardari. Bilawal said during the meeting that the investigation bodies must take notice of corruption in KP. He asked the PPP leaders to continue pinpointing corruption in KP projects.