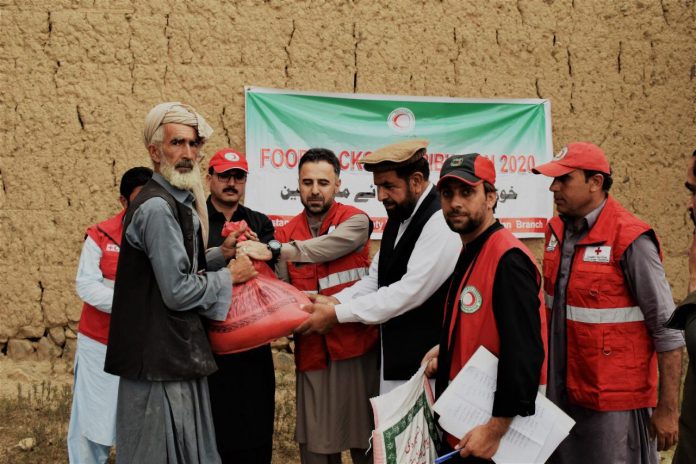 The PRCS also distributed food packages among COVID-19 affected families across the merged districts under the supervision of district administration, including the deputy or assistant commissioner. The food packages were distributed among 750 deserving people.

In the distribution ceremony Chairman (PRCS merged areas) Asif Khan Mehsud said that “throughout the war and terror situation in tribal districts, people have suffered a lot and they have experienced many difficulties, but PRCS will always supports them and have future plans to help the returnees for the restoration of their livelihoods.

Furthermore, he added that In future PRCS will establish more BHU’s and will distribute more food packages among the deserving people.

Asif Khan Mehsud said that 100 million trees plantation drives are underway; PRCS will help the community in the restoration of their livelihoods through agriculture and provide them seedlings of different fruits and vegetables which will further help local farmers to start earning.

The Pakistan Red Crescent supports activities in the merged districts were also appreciated by the local community.

Earlier, the PRCS had distributed food packages and hygiene kits to 1,400 vulnerable families affected by COVID-19 in eight districts of Khyber Pakhtunkhwa.

The project to provide food packages and hygiene kits to the vulnerable families in the eight districts of the province was supported by the German Red Cross and the International Committee of the Red Cross.

The PRCS KP Chairman Lieutenant General (Retd) Mohammad Hamid Khan had said it while addressing a kits distribution ceremony in Mansehra district. He had also said that Pakistan had come closer to defeating COVID-19 and the virus was on its way out from Pakistan.

The KP chairman said PRCS was fully prepared to provide assistance to those affected by the pandemic. He said that their aim was to help the communities in need by providing assistance in disasters.