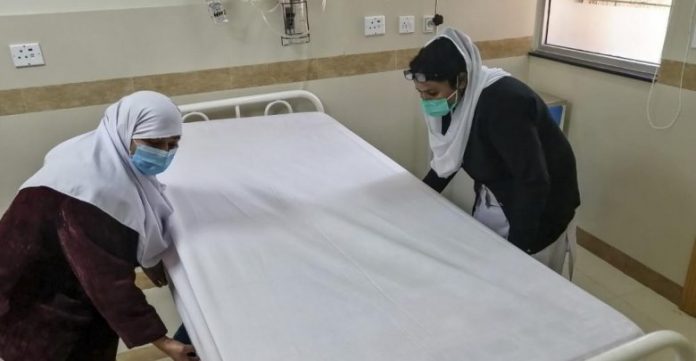 PESHAWAR: Preparations have been initiated for reopening the out-patient department (OPD) of the largest public sector hospital of Khyber Pakhtunkhwa which was closed due to the fear of spread of coronavirus.

The chairman of board of directors has given the task of supervising the opening of OPD to Medical Director Dr Suleman Khan. Recommendations have been sought from all the departments of Lady Reading Hospital (LRH) in this regard.

The spokesman said social distancing and other standard operating procedures (SOPs) in the hospital will be followed strictly. He said the decision of opening of OPD has been taken keeping in view the difficulties of people. He said the opening of the OPD of the largest hospital of KP will benefit the patients and their difficulties will reduce.

OPDs in different public sector hospitals in KP were closed due to the fears of spread of coronavirus. The patients, particularly those with weak financial position, were facing a lot of difficulties due to closure of the OPDs as they could not afford expensive treatment at private clinics.

Two days earlier, the OPDs of hospitals of Lower Dir, which were closed for 64 days, were reopened for patients.

On the first day of the OPDs reopening on Wednesday, a large number of patients came to hospitals for treatment. The OPDs were reopened with instructions that SOPs must be followed.

District Headquarters Hospital Timergara Medical Superintendent Dr Shaukat Ali and other officials visited the hospital and oversaw the performance of the OPD. He expressed satisfaction over following of the SOPs at the hospital to avoid the spread of coronavirus.

The MS also met patients who came from different areas. He said the OPDs have been opened keeping in view the larger interest of people. He appealed to the people coming to hospitals to wear facemasks and also follow other SOPs to protect them and other people from the virus.