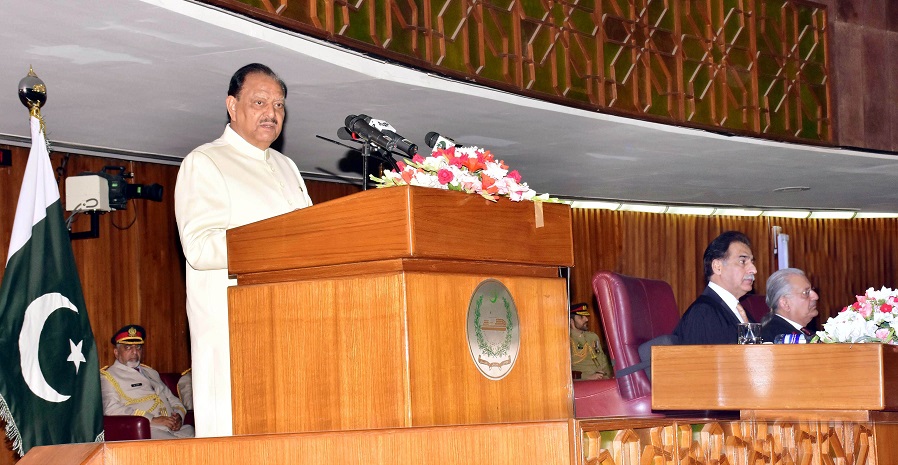 ISLAMABAD, 01 June: President Mamnoon Hussain on Thursday said that Federally Administered Tribal Areas (FATA) and Balochistan will be brought into the mainstream in socio-economic  uplift process at the national level.
Addressing a joint session of Parliament, he said that the government has allocated significant funds to bring these areas on a par with other parts of the country. The joint session was attended by Prime Minister Nawaz Sharif, Army Chief General Qamar Javed Bajwa, all four governors and chief ministers and foreign ambassadors.
In his address, Mamnoon Hussain highlighted government achievements in economy, power and infrastructure sectors. He also bring into light government achievements in war against terror and Pakistan Army’s sacrifices in bringing peace in the country. “Operations like Zarb-e-Azb, Raddul Fasad will be executed successfully and strengthen the country further,” he remarked.
As soon as the president began his speech, members of the opposition benches went all-out to disrupt Manoon Hussain speech by shouting Go Nawaz Go and traitor slogans. The opposition members, later, staged a walkout from the House to record their concerns on the government policies.
Justifying boycott, Leader of the Opposition Khurshid Shah told media outside Parliament that the president never addressed the nation on national issues. The president never focused on major issues like corruption and terrorism and he does not pay attention to Fata issue which is directly related to his presidency. he concluded.
The opposition parties had announced to boycott from the president speech in the backdrop of the government’s refusal to broadcast the opposition’s budget speeches live on PTV. Similarly FATA parliamentarian also boycotted from the Mamnoon Hussain’s speech to protest delay in approval of FATA reforms from National Assembly.