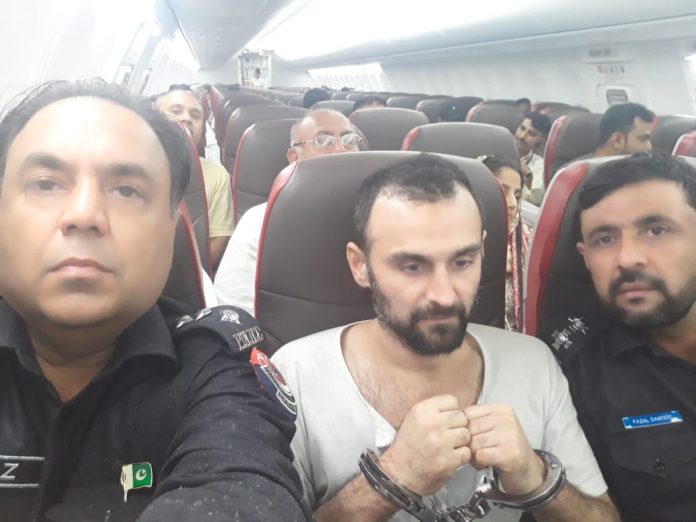 CHARSADDA: The prime accused in Charsadda triple murder case has been shifted from Malaysia to Charsadda, after he was apprehended by the International Police (Interpol) in Kuala Lumpur on August 2.

The announcement was made by the Deputy Inspector General of Police (DIG) Mardan Region, Muhammad Ali during a press conference at the District Police Officer (DPO), Charsadda office on Saturday.

Nadir Khan is accused of killing three real brothers over property dispute in Charsadda, Umarzai on May 26. After the brutal crime, the accused escaped to Malaysia where he was nabbed by the Interpol on August 2.

The DIG said that two accomplices of the prime accused, Nadir Khan, in the crime, have already been arrested who has brutally killed three children of a mother in Umerzai. The DIG added that it was a test for the KP police to arrest all the suspects in which they’ve achieved success as all the accused are now behind the bars.

On May 26, three brothers were gunned down in Ali Jan village within the jurisdiction of Umarzai Police Station in Charsadda over a property dispute. The Khyber Pakhtunkhwa Inspector General of Police Mohammad Naeem Khan had constituted a Joint Investigation Team (JIT) to probe the triple murder case in Umarzai.

Mother of the three slain had said that Pir Mohammad, on the accused already arrested, had come to their house and taken her sons to the hujra of Nadar Khan. She had told police that Pir Mohammad was also involved in firing on her sons at the hujra. The KP Police has said that all protection would be provided to victim family members.

The DIG announced that the Nadir Khan will be presented before the anti-terrorism court for his physical remand after which the Joint Investigation Team comprised of police and security agencies official will further investigate him into the case.