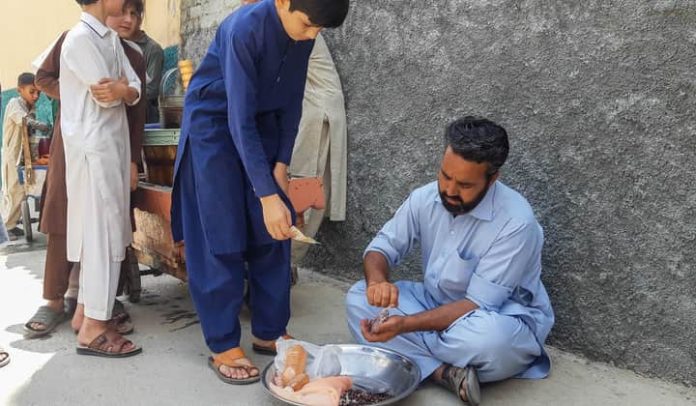 SWAT: The principal of a private school in Swat, who has spent his life teaching his students about the importance of education, is now selling boiled chickpeas on roads and streets after the school administration stopped his salary due to coronavirus lockdown.

Hailing from Haji Baba Barama area of Mingora city, Haider Hayat, 36, has an experience of 12 years of teaching in different private educational institutions. He was recently promoted as principal of a private school in Mingora for which he was given Rs20,000 salary per month. However, after the outbreak of coronavirus pandemic, Haider Hayat also ended up sitting at home, which meant that he lost his source of income, at least till return of normalcy.

Haider Hayat said while talking to TNN that all the schools, including his school, were closed after coronavirus outbreak and teachers were sent home and their salaries were stopped due to which they went into deep financial crisis. The principal, a graduate from Malakand University, said when his first salary was stopped, he bought daily use items from nearby shops on loan, but when the shopkeeper came to know that the schools are closed indefinitely then he stopped giving anything to him.

“I was highly disturbed. One day I brought chickpeas to home for cooking and then a thought came to me why not I should try selling chickpeas,” he said.

The teacher said there are about 12,000 men and women working in private educational institutions in Swat, but most of them remained deprived of the financial assistance of Rs12,000 under the government’s Ehsaas Program. He said the teachers of private schools suffered a lot due to coronavirus as they lost their source of income.

A lot of stories of such teachers facing financial crisis have been reported on various media platforms. It is also a bitter fact that almost all private educational institutions are regularly receiving monthly fee from parents of students, but not paying salaries to teachers, while the government hasn’t taken any action against such schools.