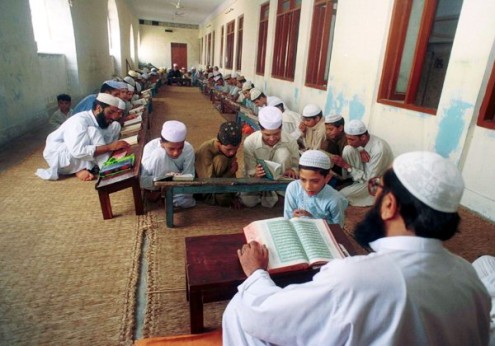 Mufti Noor Wali Shah, a teacher in Jannat-ur-Rasheed religious seminary in Dera Ismail Khan tells TNN that the government has been treating the seminaries leniently as compared to other educational institutions and has allowed the holding of classes under the corona SOPs.

“We didn’t discontinue our classes as we have been actively following the laid down SOPs. We have been told that those students and teachers, who have been residing inside the madrassas, should not be allowed to go outside,” Mufti Noor Wali Shah continues.

A private school’s owner tells TNN that they suffered huge financial losses during the first wave of the pandemic, adding “if things get worse and schools are closed again, the private schools’ owners will collapse”.

Ibrahim Khan, the principal of a private school questions the government’s policy of keeping the schools open for one day in a week, saying, “How it is possible to teach the work of the entire week in just one day”.

“If the private schools are open, students will happily pay their monthly dues in time. We will also be able to pay salaries to the teachers on time and hence, the education activities will continue,” he argues.

“The schools remained closed for about six months. We hardly manage to pay the rents of the school building and salaries of the teaching and non-teaching staff,” he informs.

Saud Mehsud, a resident of South Waziristan partially agrees with Ibrahim Khan, saying the closure of schools will definitely affect the future of the students. At the same time, he says the decision to close the schools has been taken in the interests of the students.

“When the schools are closed, students will stay at home and will be protected from the coronavirus pandemic. On the other hand, the precious time of students is getting wasted. The idea of conducting online classes is perhaps the most appropriate but unfortunately, it is not suitable for areas like Waziristan where there is no internet connectivity. Thousands of students are unable to benefit from the online classes and their time is being wasted,” he says.

According to the Commissioner of the Dera Ismail Khan division, Yahya Akhunzada, the second wave of the coronavirus pandemic seems to be more lethal as compared to the first wave. “The infection rate is higher all over the country and it is between seven and eight percent in DI Khan. The government has closed the educational institutions to protect the children from the virus,” he says.

“The district administrations have been strictly directed to continue visiting educational institutions and take stern actions against the violators,” he informs.