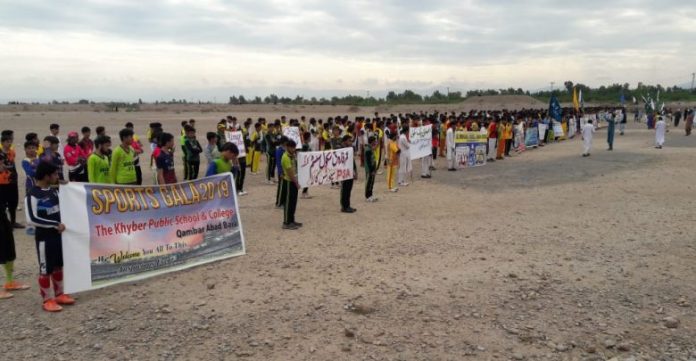 PESHAWAR: The sports gala featuring teams from private schools of Mohmand and Khyber tribal districts was inaugurated in Khyber district on Wednesday.

Member of Khyber Pakhtunkhwa Assembly from PK-107 Shafiq Afridi inaugurated the event at Shahid Afridi Sports Complex in Khyber tribal district. Competitions in cricket, volleyball, football and other sports will be held during the sports gala. Seventy-two teams from 37 private schools are participating in different sports events.

The sports gala was also inaugurated in Mohmand tribal district. The youth presented the local atten dance and songs on the occasion. A large number of people were present on the occasion to enjoy the event. In Mohmand district, over 1,800 students of 30 private schools are participating in different sports contests.

Director Sports in merged districts Nawaz Khan said on the occasion that the sports events are being organised on special instructions of KP Minister for Sports and Culture Muhammad Atif Khan. He said the provincial government is taking keen interest in promotion of sports activities in merged tribal districts. He said the provincial government has allocated Rs8.5 billion for different sports projects in tribal districts.

The prices of vegetables have witnessed enormous hike in KP during the recent days.

The citizens are perturbed over increasing prices of vegetables. They said there is no increase in income while increasing price-hike and taxes have broken their back and it has become difficult to support their families.

The recent increase in prices of vegetables is attributed to the increasing prices of petroleum and overall inflation in the country. The concerned authorities also seem to be least bothered about the issue and official price lists are seldom followed by vegetable sellers.