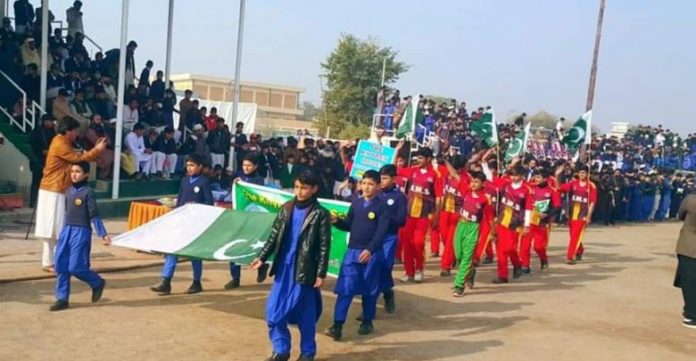 JAMRUD: The inauguration ceremony of the sports gala under All Private Schools Association was held at Jamrud Sports Complex in Khyber tribal district on Sunday.

Member Khyber Pakhtunkhwa Assembly Bilawal Afridi and Deputy Commissioner Mehmood Aslam were chief gusts on the occasion, while tribal elders, parents of students and other people were also present on the occasion.

As many as 84 teams from private educational institutions of Khyber tribal district are participating in the sports gala. Competitions in cricket, football, volleyball and athletics will be held during the sports gala at different grounds of Jamrud. The sports competitions will continue for a week.

Private Schools Association President Shahzad Afridi and other office holders said on the occasion that the purpose of the sports gala is to provide a healthy atmosphere to students besides their academic activities. They said it is imperative to arrange healthy sports activities for students to keep them away from narcotics and other negative activities. He said a message is being given to the world through the event that the people of the tribal districts are peace loving.

Bilawal Afridi on the occasion announced Rs100,000 for the organisers and free of cost uniform and books for orphan students.

The participating students in the sports gala said they are very happy over participating in the event. They said such positive activities must be arranged on regular basis in tribal districts.

Boy injured after falling into ditch

A 10-year-old boy fell into a ditch while playing outside his home in Bara, Khyber tribal district, on Saturday.

The boy, Asif, sustained serious injuries when he fell into the ditch in Karegarh Garhi area of Bara after which he was shifted to Hayatabad Medical Complex in Peshawar. Family sources said the boy has fractured his leg and has also sustained injuries in other parts of the body. The sources said the boy remained unconscious for several hours due to injuries and shock. However, they said, his condition is out of danger now.