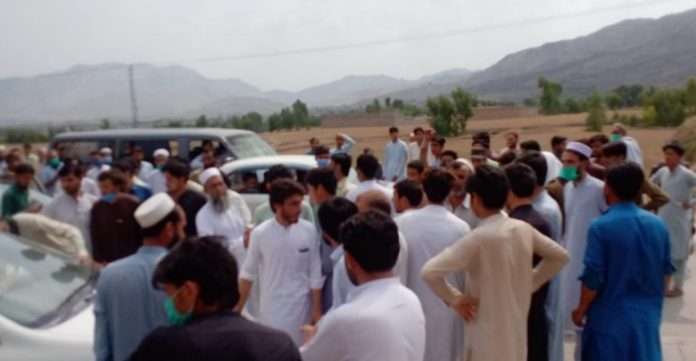 PESHAWAR: The problem of excessive power load-shedding in merged tribal districts, particularly in Mohmand and Khyber, remains unresolved due to which protests by the people of these areas are continuing.

On Friday, the people of Yakkaghund in Mohmand tribal district blocked Peshawar-Bajaur Highway due to which traffic was jammed and transporters and commuters faced a lot of difficulties in the hot weather.

The protesters said they are facing load-shedding problem for the last one month due to which their lives have become difficult. They said there is no water in houses and mosques, people are contracting different diseases and particularly women and children are facing more difficulties as they remain inside home all the time. They said they simply cannot tolerate 22 hours of load-shedding.

The protesters said Mohmand district is deprived of electricity despite the fact that Warsak Dam exists in their area which provides electricity to the whole country. They said the area people are being subjected to discriminatory attitude despite several assurances by the Wapda officials of resolution of the problem.

The protesting people alleged that illegal factories are being provided electricity from their electricity line due to which their feeder is overloaded and they are facing long hours of load-shedding. They said separate feeders must be provided for factories so that the problem of the area could be resolved.

The tribesmen also said that the government is continuously instructing the people to observe social distancing and precautionary measures by not coming out of homes unnecessarily due to the fear of spread of coronavirus. However, they said, they can’t do so as there is no electricity at home.

“How can I sit the whole day and night at home when there is no fan or light,” asked one protester.

A protest was also staged on Charsadda Road in Peshawar against excessive load-shedding on Friday.